US authorities are investigating a massive theft of jewelry from a Brink’s armored vehicle in California last week.

The executive estimated the losses at $100 million to $150 million. Brink’s put the value at less than $10 million, according to media reports — a discrepancy explained by the practice of vendors underinsuring goods, Swanson noted.

“They all have invoices and paperwork to show the higher value,” Swanson said.

The theft occurred early on July 11, according to a spokesperson for the Federal Bureau of Investigation (FBI) in Los Angeles, which is investigating the case together with the Los Angeles County Sheriff’s Department.

On that day, deputies from the Sheriff’s Department station in Santa Clarita, California, were called to the “Flying J” rest stop and gas station in the mountain community of Lebec in response to the burglary of a cargo container.

They “learned that several pieces of jewelry and gemstones valued at several million dollars were stolen from a locked ‘Brink’s’ tractor trailer by unknown suspects,” the department said Monday in a report.

“According to the information the customers provided to us before they shipped their items, the total value of the missing items is less than $10 million,” Brink’s said in a statement quoted in the US media. “We are working with law enforcement, and we will fully reimburse our customers for the value of their assets that were stolen, in accordance with the terms of our contract.” The company did not respond to a request for comment from Rapaport News.

Tiffany & Co. will offer a necklace featuring an 80-carat diamond, expected to be its most expensive piece ever, at the reopening of its New York Fifth Avenue flagship store next year.

The oval-cut, D-color, internally flawless stone, which the jeweler sourced from Botswana and will set in-house in New York, is at the center of the piece, Tiffany said Tuesday. It is also the largest diamond the company has ever offered. Only the 128.54-carat, yellow Tiffany Diamond worn by both Audrey Hepburn and Lady Gaga is larger, and that piece is not for sale.

The jewel is a reimagined version of a Tiffany necklace created in 1939 for the World’s Fair, which features an aquamarine in place of the diamond. The unveiling of that piece set the stage for the original opening of the flagship store on the corner of 57th Street and Fifth Avenue in 1940.

“What better way to mark the opening of our transformed Tiffany flagship store in 2022 than to reimagine this incredible necklace from the 1939 World’s Fair, one of our most celebrated pieces when we opened our doors…for the first time,” said Victoria Reynolds, chief gemologist at Tiffany.

The largest deal in luxury is back on after New York’s famed jeweller Tiffany agreed to a slightly reduced offering price from LVMH in Paris.

The owner of Louis Vuitton, Christian Dior, Fendi along with a basket of wine and champagne brands, appeared to walk away from the acquisition last month after it said the French government had pushed for a delay because of the threat of proposed US tariffs. But the reasons for its cold feet seemed to shift, and there was pressure from investors on both sides to make a deal happen.

Rumours that the two luxury companies had rekindled talks began to surface in recent days.

“We are as convinced as ever of the formidable potential of the Tiffany brand and believe that LVMH is the right home for Tiffany,” LVMH’s billionaire CEO Bernard Arnault said in a prepared statement on Thursday.

Tiffany & Co’s flagship store in Sydney. The company has hired advisers to review LVMH’s offer but has not yet responded to it

Tiffany sues LVMH for reneging on $22b deal as France steps in
Tiffany, with its famed blue boxes, has in recent years attempted to regain the luster of the “Breakfast at Tiffany’s” era as its customer base ages.

It’s shifted its focus to younger shoppers and made a significant push online. The deep pockets of LVMH could go a long way in helping that transformation along.

LVMH, led by billionaire Arnault, a consumate dealmaker, believes Tiffany will strengthen its position in high-end jewellery and in the US market.

LVMH is also making a bet on China’s economy, where Tiffany has been expanding.

The buyout has been approved by the boards of both companies, and it’s expected to close early next year.

A growing number of US retailers, including Tiffany & Co., are temporarily shuttering all locations across North America in an effort to stem the coronavirus spread.

“Effective immediately, we’re temporarily closing all Tiffany stores in the US and Canada, as well as many other locations globally, to protect our teams, clients and communities,” the jeweler said in an Instagram post Tuesday. “Now more than ever it is time for us to take care of the ones we love.”

Macy’s closed all its stores nationwide as of close of business Tuesday, including its Bloomingdale’s department-store chain. However, all its brands will continue to operate via online sites and mobile apps, it noted.

“The health and safety of our customers, colleagues and communities is our utmost priority,” Macy’s CEO Jeff Gennette said Tuesday. “We will work with government and health officials to assess when we will reopen.”

Nordstrom has also announced it will suspend operations at all its North American stores, yet the company has limited the closure to a two-week period, it said. During that time it will offer curbside pickup for online orders. Meanwhile, Saks department store has shut its New York and Philadelphia locations, according to the Los Angeles Times.

Meanwhile, Pandora will not only close its US-based stores, but will shut locations in Italy, Spain, Germany and France, among others. It has also encouraged its franchisees and multi-branded partners in affected markets to cease operations voluntarily.

Signet Jewelers has not declared official plans to close any stores, but said it would follow the advice of the World Health Organization (WHO) and the Centers for Disease Control and Prevention (CDC).

“Nothing is more important than the safety of our employees and customers,” David Bouffard, Signet’s vice president of corporate affairs, told Rapaport News Wednesday.

Signet shares were down 35% since start of trading on Wednesday, March 11, while Macy’s dropped 29% and Tiffany slipped 11%. 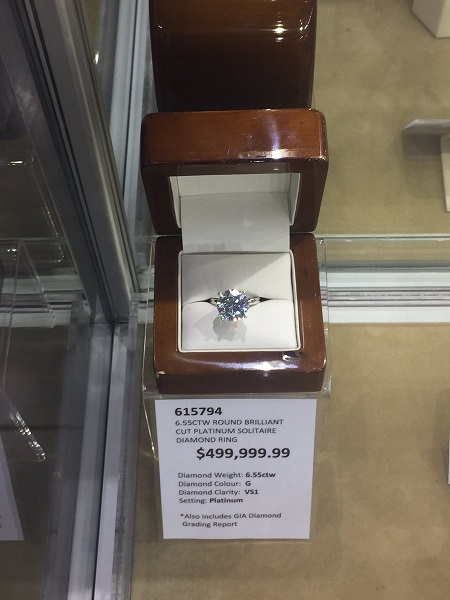 Costco sells 6.5-carat diamond rings worth nearly $US400,000 amid the bulk groceries and home goods that lure bargain seekers to its warehouse stores.

Sky News reporter Jennifer Bechwati tweeted Sunday that she found a diamond ring costing 499,999.99 AUD (or roughly $388,900 USD) at a Costco store in Australia “between bulk AA batteries and dustpans.”

She posted a photo of the round-cut ring that listed its weight as 6.55 carats with colour and clarity of “G” and “VS1,” respectively. The diamond was set in a platinum band.

It turns out that the warehouse chain sells a host of expensive diamonds in stores and online. Costco’s US website lists 303 diamond rings with stones as big as 10 carats. Prices range from $US159 to $US420,000.

Shoppers might not expect to find such expensive rings in stores, but a Costco spokeswoman told the Daily Mail that every one of its warehouses has at least one “WOW” item in its jewellery department.

Some people commented online that the colour and clarity of the 6.55-carat stone could be better for the price. A search online at James Allen, another diamond retailer, shows a diamond with a similar cut, clarity, and colour for $US354,000, or about $US34,000 cheaper than the Costco ring.

Costco was ordered to pay the jewellery company Tiffany more than $US19 million last year for selling about 2,500 rings falsely identified on store signs as “Tiffany” rings. Costco argued that the description referred to the rings’ settings, and wasn’t meant to be confused with Tiffany’s brand.