Sotheby’s will auction a stone described as “the largest vivid blue diamond ever to appear at auction” on April 27 in Hong Kong.

Sotheby’s estimates that it could bring $48 million.

The 15.1 carat step-cut blue was cut from a rough stone discovered in April 2021. It is “the largest internally flawless step cut vivid blue diamond that the Gemological Institute of America (GIA) has ever graded,” according to a press statement.

“This diamond ranks as one of the best De Beers has ever seen,” said Bruce Cleaver, CEO of De Beers Group. “It is extremely rare and unique, and as the Home of Diamonds, De Beers is pleased to join together with Sotheby’s to bring this diamond to the world.”

Only five blue diamonds over 10 carats have ever come to auction, Sotheby’s notes. Until now, none has exceeded 15 carats.

“Blue diamonds of any kind are rare on the market, but this is the rarest of the rare; nothing of remotely similar calibre has appeared at auction in recent years,” says Patti Wong, chairwoman of Sotheby’s Asia. “Hundreds of millions of years in the making, this extraordinary blue diamond is surely one of nature’s finest creations.”

The diamond comes from the Cullinan mine in South Africa.

A blue diamond ring is among the top lots at the Sotheby’s Magnificent Jewels sale in New York next month.
The piece contains a cut-cornered rectangular modified brilliant-cut, 6.11-carat, fancy-intense-blue, VS2-clarity diamond surrounded by round diamonds. It is estimated to bring in up to $6.5 million at the December 7 auction, Sotheby’s said Monday.

A cut-cornered rectangular mixed-cut, 6.69-carat, fancy-intense-pink, VS2-clarity diamond ring with a high valuation of $6 million will also star in the sale, as will a cushion-cut, 3.01-carat, fancy-vivid-blue diamond. The stone, which is set in a ring and flanked by two heart-shaped diamonds, is expected to sell for up to $4.5 million.

An unmounted, heart-shaped, 15.01-carat, D-color, internally flawless diamond will also be up for grabs. The stone, which is being offered without reserve, has a high estimate of $2.5 million. Sotheby’s is collaborating with Brilliant & Black designer Lauren Harwell Godfrey to make a finished jewelry piece for the diamond, it noted. She has created two original designs that utilize her signature triangle inlay pattern — for a necklace and a ring.

Meanwhile, 30 jewels from an American private collector will also go under the hammer. The entire group is estimated at more than $6 million and includes one of the most significant collections of Bulgari pieces ever to come to market, Sotheby’s explained.

In total, the auction house will offer more than 200 lots, with the sale forecast to fetch as much as $70.1 million — the highest estimate for a New York Magnificent Jewels sale since December 2018, Sotheby’s added.

The public can now feast their eyes on a big blue diamond thanks to New York’s American Museum of Natural History.  The museum opened an exhibition Tuesday showcasing the “Okavango Blue,” a 20.46-carat oval-cut fancy deep blue diamond on loan from Okavango Diamond Company, which is wholly owned by the government of Botswana.

It has been given a VVS1 clarity grade from GIA.  The diamond came from Botswana’s Orapa mine and is the largest of its kind found in the country to date.  The Okavango Blue was named after Botswana’s Okavango Delta, a UNESCO World Heritage Site of global importance for biological conservation and diversity.  It’s the first time the diamond is on view to the public and sits at the center of a larger presentation about diamonds from Botswana, exploring industrial uses for diamonds and how Botswana runs its diamond industry as well as educating about the different characteristics of diamonds like size, shape, color, and quality.  Botswana is the second-largest producer of natural diamonds in the world, behind Russia.   Previous

Next “Our natural diamond resources are managed responsibly in a manner that puts the people of Botswana first,” said Okavango Diamond Company Managing Director Mmetla Masire. “There is a strong sense of local pride knowing that these diamonds are improving the lives of Batswana, with profits directly reinvested in education, infrastructure, and public health. “We are so pleased to share with the world the larger story of the diamond industry of Botswana. The Okavango Blue is not just an ordinary 3-billion-year-old polished carbon element, but rather a physical embodiment of the passing of time, a fragment of eternity. Our diamonds tell the rich history and unique journey of Botswana’s development.” The exhibition sits in the Melissa and Keith Meister Gallery in the museum’s new Allison and Roberto Mignone Halls of Gems and Minerals, which reopened in June after a major renovation.   The Okavango Blue and its corresponding Botswana diamonds exhibition will run for six months, AMNH confirmed.

It was the most expensive of a “Perfect Palette” of three colored diamonds that raised a total of $8.4m last week at Christie’s New York April Magnificent Jewels.

The sale of over 200 lots – including signed pieces by Belperron, Bulgari, Cartier, Graff, Harry Winston, Hemmerle, JAR, Lacloche, Tiffany & Co., and Van Cleef & Arpels – brought in a total of $35m.

Christie’s said there were bids from 40 countries and 94 per cent of lots were sold.

Prices of fancy-color diamonds slipped marginally in the fourth quarter of 2020 as stability in the yellow category helped the sector stave off a heavier slump, according to the Fancy Color Research Foundation (FCRF).

“Although 2020 was challenging in terms of logistics and travel, contrary to market expectations, fancy-color diamond prices proved to be resilient, with minor price decreases across the board,” the FCRF said Monday.

The organization’s Fancy Color Diamond Index for yellows inched down 0.3% year on year in the three months ending December 31, while prices for blues fell 1.3%. Pink fancy-color diamonds decreased 0.9%, with the overall index slipping 0.8%.

The 1.50- and 5-carat categories were the strongest for fancy blues, increasing 0.5% versus the previous quarter, while fancy-vivid blues decreased 0.6%, led by soft prices for 1-carat stones in that category. Pinks stayed mainly flat compared to the third quarter, with 2-carat fancy pinks seeing the highest rise, up 1.4%. In yellows, the fancy-intense, 5-carat segment grew 0.8%, and the price for fancy-vivid, 3-carat stones was up 0.7%. Fancy-yellow, 1.50-carat diamonds increased 0.6% during the period.

The FCRF believes prices of yellows will continue to remain strong throughout 2021.

“2020 was a fascinating year; wholesalers and retailers alike had to overcome many logistical hurdles in order to finalize simple transactions, while demand for fancy-color diamonds was solid,” said FCRF advisory board member Eden Rachminov. “I expect 2021 to be a bullish year for yellows; their current price is relatively low and I think that a price increase is inevitable.”

The 9.75 carat Zoe Diamond which sold for more than $32 million. 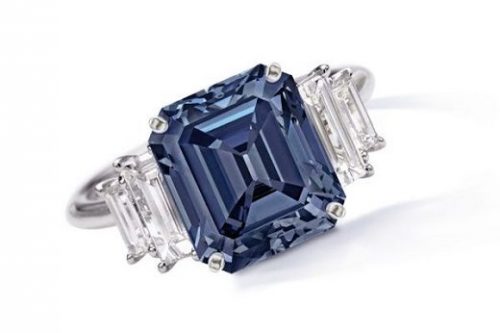 Sotheby’s brought in a total of $40.2 million at its Hong Kong auction Wednesday as a 5 carat blue diamond fetched $13.8 million.

The price of the step cut, fancy vivid blue, named the Ai diamond, after the Chinese word for love, fell within its estimate of $12.5 million to $15.3 million. The final selling price translated to $2.8 million per carat. 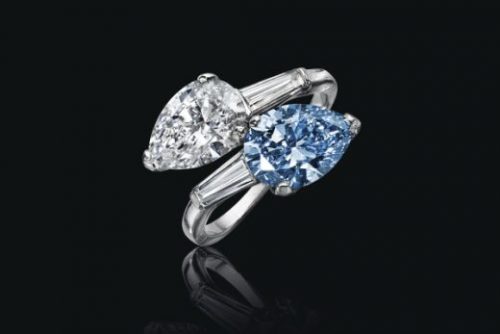 Prices for fancy blues jumped 5% year on year for the three months ending March 31, according to the FCRF, which released its quarterly Fancy Color Diamond Index on Monday.

By contrast, prices of fancy pink diamonds declined 1.7%, while the index for yellows slipped 0.6%, the organization said. The overall index for fancy color diamonds edged up 0.1%.

Vivid blues and vivid pinks weighing 2 carats showed the best performance in their respective color categories during the quarter. 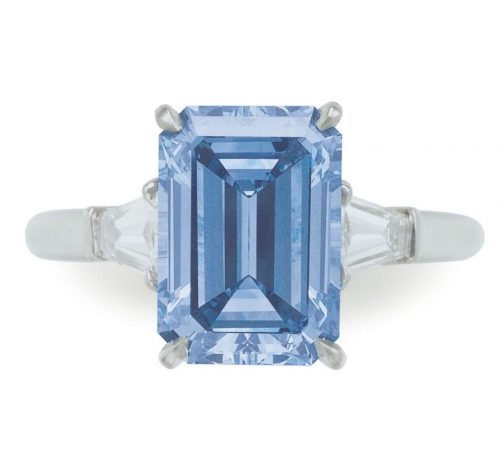 Setting a new record price per carat for an intense blue diamond.

The Polished Blue Diamond was set in a platinum ring flanked by tapered baguette cut diamonds. 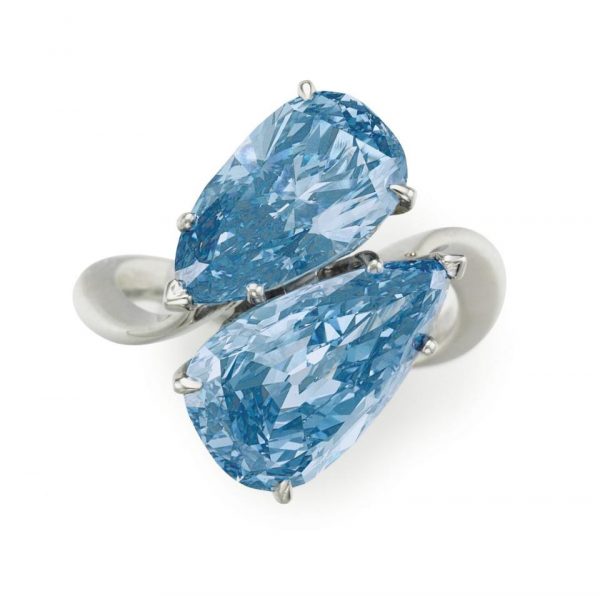 The two Vivid blue Diamonds weighing approximately 3.36 and 2.71 carats with VVS2 and VS1 clarity grades are set in a crossover design, In a platinum setting.