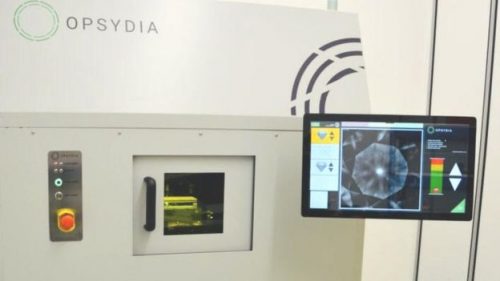 In a lab in the California city of Carlsbad, between Los Angeles and San Diego, a suspicious diamond recently arrived.

On the outer edge – what jewellers call the girdle – was a tiny inscription, of a bona fide diamond security code issued in 2015.

But the font was a different one than the Gemological Institute of America, or GIA, uses.

“Rarely do we encounter the type of blatant fraud described here,” say Christopher Breeding and Troy Ardon from the Carlsbad lab.

Carlsbad is the headquarters of the GIA, a non-profit organisation that evaluates and certifies diamonds for quality.

It assigns diamonds report numbers, which a laser can then carve on to the diamond. But this method has its problems.

“It is easy to be removed, just polish it off,” says Andrew Rimmer, chief executive of Opsydia, an Oxford University spin-out. “Also it’s easy to apply someone else’s serial number.”

So Mr Rimmer has been working on lasers that can write security codes beneath the surface of diamonds instead.

And codes inside diamonds are forever. 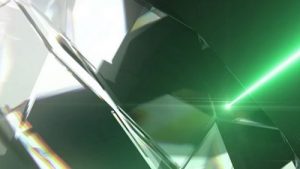 Diamonds are a huge business, with 133 million carats (about 27 tonnes) of rough diamonds worth about $15bn-$16bn (£12bn-£13bn) mined each year, according to Boston consulting firm Bain & Company.

About half originate in Africa, where in some countries, like South Africa and Botswana, mining is well regulated.

And last year, three Russian journalists were killed while investigating the Kremlin’s links to militias in the Central African Republic who fund their fighting with diamond sales.

Synthetic diamonds are also an issue for the industry – adverts have appeared on China’s Alibaba e-commerce site with documentation stating they are natural.

Such concerns have taken the shine off diamond sales in 2019.

In response, many people in the diamond industry have been working on using the blockchain – a tamper-proof distributed ledger – to store information on a gem’s history, from the mine to the jewellery shop.

So it will be possible to “provide clients with a full history of a diamond, starting from the moment it was mined”, says Alrosa’s Eugeniya Kozenko.

“We can create lots of apps along the way” that draw on the blockchain, says Jim Duffy, chief executive of Tracr.

The hardest bit has involved creating robots for producers to use to scan diamonds at scale, and machine-learning algorithms to automate identifying the diamonds, Mr Duffy says.

The programme started with “artisanal and small-scale diamond miners in Sierra Leone”, and helps them record GPS locations for each diamond they find, which they then place in a QR-coded tamper-proof bag, she says.

In another sign that the sector is warming to blockchain tech, Lucara Diamond, a Canadian mining company, bought a blockchain business called Clara last year.

Their diamonds will “get scanned shortly after they’re recovered from the mine, and put on blockchain,” says John Armstrong, Lucara’s vice president for technical services.

Putting a full account of a diamond’s provenance on to a blockchain offers an “extremely secure way of storing detailed information”, says Opsydia’s Mr Rimmer. “But you still need to make sure the stone is the one it purports to be.”

So how can you write a permanent, tamper-proof security code inside a diamond?

With difficulty would seem to be the answer. Diamond has a high refractive index, meaning it bends light a lot.

“So whichever direction you want a laser to go, usually it goes somewhere else,” Mr Rimmer explains.

Engineers at Oxford were doing research around getting the highest possible resolution from telescopes, and compensating for fluctuations in the atmosphere.

And this turns out to produce answers that also apply to focusing lasers on targets that are very small.

So marks as small as one-thousandth of a millimetre can be made 0.15mm below a diamond’s surface in a trillionth of a second. The extremely high speed keeps the laser burst from heating up the stone.

Marks this small can’t be seen even with a jeweller’s magnifying glass, or loupe. You need a powerful microscope.

And since they’re so tiny, they don’t have to be on the outside girdle, which is covered up when the diamond is placed in jewellery, but can be in the top surface or around the crown where they can always be read.

Opsydia has just sold it first machines to De Beers.

But once you can write things inside diamonds, “you can write electrical circuits; it takes you into science instrumentation and ultimately quantum computing,” says Mr Rimmer.

Maintaining trust in the authenticity and provenance of diamonds is essential to keep an increasingly sceptical public buying.

Ajay Anand, founder of New York-based Rare Carat, built a platform that pulls in data on diamonds for sale from both big and small retailers.

He realised that “diamonds are the perfect data set for machine learning and price prediction”.

There are about 30 or 40 variables associated with any diamond, he says.

“So we put together the largest data set probably in existence – our algorithms can predict the price of a diamond pretty accurately,” he says.

The platform tells customers how good a bargain it thinks a particular diamond is.

And “we’re empowering dozens of smaller online and local retailers, with lower overhead costs,” but who might struggle to get customers through the door, he says.

The industry will be hoping that these new marking, tracing and buying technologies will ensure diamonds never lose their lustre.