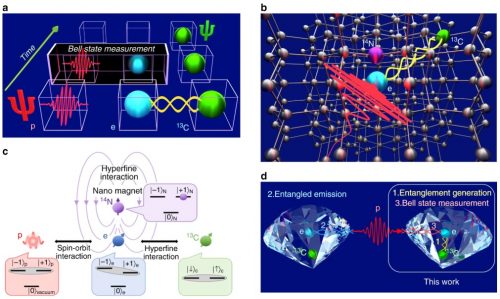 Japanese researchers carry out quantum teleportation within a diamond.

Scientists figure out how to teleport information within a diamond.
The study took advantage of defects in the diamond’s structure.
The achievement has implications for quantum computing.

Hideo Kosaka, a professor of engineering at Yokohama National University, led the study. He explained that the goal was to get data where it doesn’t normally go

The “inaccessible space” explored in the study was the lattice of carbon atoms in a diamond. The strength of the structure stems from the diamond’s organization that has six protons and six neutrons in the nucleus, with six spinning electrons around it. As they bond to the diamond, the atoms form a super-strong lattice.

For their experiments, Kosaka and his team focused on defects that sometimes arise in diamonds, when a nitrogen atom appears in vacancies that would ordinarily house carbon atoms.

Kosaka’s team manipulated an electron and a carbon isotope in such a vacancy by running a microwave and a radio wave into the diamond via a very thin wire – one fourth the width of a human hair. The wire was attached to the diamond, creating an oscillating magnetic field.

The scientists controlled the microwaves sent to the diamond to transfer information within it. In particular, they employed a nitrogen nano magnet to transfer the polarization state of a photon to a carbon atom, effectively achieving teleportation.

The diamond’s lattice structure features a nitrogen-vacancy center with surrounding carbons. In this image, the carbon isotope (green) is initially entangled with an electron (blue) in the vacancy. It then waits for a photon (red) to be absorbed. This results in quantum teleportation-based state transfer of the photon into the carbon memory.

“The success of the photon storage in the other node establishes the entanglement between two adjacent nodes,” Kosaka said, adding that their “ultimate goal” was to figure out how to make use of such processes “for large-scale quantum computation and metrology.”

The accomplishment could prove vital in the quest for new ways to store and share sensitive information, with previous studies showing diamonds could house giant amounts of encrypted data.

You can find their study published in Communications Physics.