The 54.03-carat Chrysler Diamond necklace was among the top sellers at the Christie’s Magnificent Jewels sale in New York, bringing in $5.1 million.

The pear-shaped, D-color, internally flawless stone was originally purchased by Harry Winston in 1958 from the estate of Thelma Chrysler Foy, the daughter of railroad and automotive executive Walter Chrysler. The necklace beat its high estimate of $4.5 million at the June 8 auction, which garnered $26.6 million in total, Christie’s said Tuesday.

Also headlining the sale was the Dancing Sun, a cushion modified brilliant-cut, 204.36-carat, fancy-intense-yellow, VVS2-clarity diamond, the largest originating in North America. The stone sold for $5 million, near the upper end of its valuation.

The Flawless Match, a ring featuring a pear-shaped, 2.52-carat, fancy-vivid-blue diamond and a pear-shaped, 2.43-carat, D-color, internally flawless, type IIa diamond, fetched $2.9 million, within its estimate. Meanwhile, a collection of 19 jewels by JAR, the largest selection of the designer’s pieces offered at auction, went for a total of $5.9 million. That set was led by a diamond bracelet called Branch Under Snow, which achieved $1.9 million, more than three times its high estimate.

The auction house sold 87% of items at the event. Before the live sale, it also held a Jewels Online auction that raked in $3.5 million, with 97% of lots finding buyers.

A 204.36 carat fancy yellow diamond hits the block at the Christie’s Magnificent Jewels auction on June 8 in New York City. The Dancing Sun, with an estimate of $3.5 million to $5.5 million, is the largest polished diamond ever mined in North America.

It was cut from a piece of rough weighing 552.74 carats. Six smaller diamonds were cut from the same rough, ranging from 14.52 to 1.06 carats, and are also included in the sale. All six are set into rings. The rough diamond came from the Diavik Diamond Mine, the second to open following the great Canadian diamond rush of the 1990s.

The previous record for the largest known gem quality rough ever mined in North America was the 187.66 carat Foxfire rough, also mined at Diavik. It was cut into several gems, including a pair of pear shapes weighing 37.87 and 36.80 carats, auctioned at Christie’s New York in December 2018 for $1.5 million.

Three rings featuring diamonds with fancy-vivid color will head up the Christie’s Magnificent Jewels auction in New York next month.

An oval mixed-cut, 3.02-carat, fancy-vivid-purplish-pink, SI2-clarity diamond ring, set with round pink diamonds on the band, is estimated at up to $1.5 million. Christie’s will offer that piece without reserve.

Meanwhile, a pear brilliant-cut, 38.04-carat, D-flawless, type IIa diamond ring with a high estimate of $3.5 million will feature as a top lot. An emerald-cut, 14.50-carat, D-color, internally flawless, type IIa diamond valued at up to $1 million is also up for sale, as are signed pieces by designers Suzanne Belperron, Bulgari, Cartier, David Webb, Harry Winston, Van Cleef & Arpels, and Verdura.

Christie’s will hold a concurrent Online Jewels auction from April 8 to 20, featuring a selection of items from Bulgari, Cartier and Elsa Peretti for Tiffany & Co., among others. The auction house has not decided whether it will hold an in-person sale or conduct live bidding over the phone and online, a spokesperson told Rapaport News.

Christie’s is offering the largest D-color diamond to be sold at an online auction. What may be more important is that this sale could establish a new way of selling statement diamonds and gems.

A 28.86 carat, D color, VVS1 clarity diamond is the top lot at Christie’s Jewels Online sale, June 16 – 20. Its estimate is $1 million – $2 million, making it the highest valued lot ever offered for sale online at Christie’s.

With live auctions closed in response to the coronavirus pandemic, auction houses have turned to its already robust infrastructure of online auctions and it has paid off for the two largest auction houses, Christie’s and Sotheby’s, with sell-through rates well above 90 percent and many items surpassing estimates. However, what is being sold is limited to signed and unsigned period jewels at lower values than what are normally sold at live auctions. 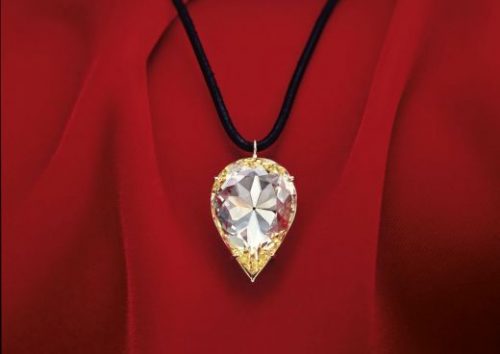 Christie’s is set to auction a 24 carat diamond necklace that Marilyn Monroe wore for the premiere of her 1953 movie Gentlemen Prefer Blondes.

The fancy yellow, VS2 clarity Moon of Baroda which originated from the famous Galconda mine that also produced the Hope Diamond  is estimated at $500,000 to $750,000. Christie’s will also auction an autographed photo of the actress wearing the stone, it said Wednesday. The picture carries a presale valuation of $10,000 to $15,000.

The 24.04 carat stone was first documented in the 15th century as part of the collection of the Gaekwads of Baroda, the ruling family of India. After disappearing for a few centuries, the piece turned up in the US in 1926, brought there by Prince Ramachandra, who then sold it.

In the 1950s, the Moon of Baroda was acquired by Meyer Rosenbaum, the president of Meyer Jewelry Company. Rosenbaum loaned it to Monroe for the opening of the film Gentlemen Prefer Blondes, in which she sings “Diamonds Are a Girl’s Best Friend.”

In 1990, Christie’s auctioned the diamond in New York for $297,000. It subsequently remained out of the public eye for more than two decades.

“After 28 years, it has once again reappeared at Christie’s, only this time, the diamond has been classified as a historical diamond,” the auction house said.

Christie’s will preview the Moon of Baroda in Los Angeles from October 16 to 20, auctioning it at its Hong Kong Magnificent Jewels sale on November 27.