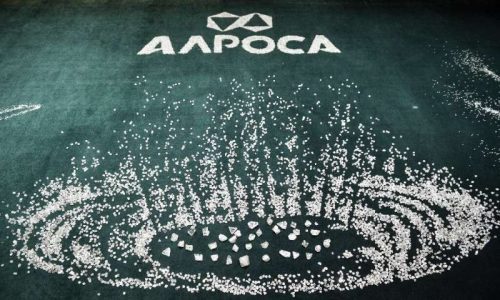 Diamonds are forever, and so is the permanently frozen ground of Yakutia in north eastern Siberia, home to huge diamond deposits that ensure Russia’s supremacy in world production of the luxury stone.

In the city of Mirny, the sun shines almost continuously during the region’s white night season in early July, with temperatures exceeding 30 degrees Celsius.

But the summer does not last long. Yakutia is known for having the coldest winters on the planet, which drag on for nine dark months.

This region—rich in oil, gas and precious metals—is also home to eleven out of twelve mines belonging to Russia’s Alrosa group, the world’s largest producer of rough carats.

The majority state- and local government-owned company employs most of Mirny’s 35,000 inhabitants and contributes around 40 percent of the wider region’s budget in taxes.

Alrosa, which has been criticised by some locals for alleged environmental damage including polluting water supplies, has a reputation for secrecy but is now making efforts to demonstrate some of its work.

In Mirny, a gaping hole of massive depths—the abandoned mine “Mir”—stretches out into the city. It is more than a kilometre in diameter and 525 meters deep, or nearly two Eiffel towers placed end to end.

“Each stone must be sorted by size,” said Irina Senyukova, leaning on stones in the nearby sorting room.

To reach the next diamond deposits themselves, visitors board a 20-seater Antonov plane and head north, across the taiga, to Nakyn, where Alrosa operates two open pit mines and is planning for a third out in the wilderness.

The most productive mine, Botuobinskaya, is currently only 130 metres deep, but the company plans to dig down 580 metres.

The operating mines will be exploitable until 2041, the company hopes.

Inside the mines, the temperature drops to -55 degrees Celsius in winter, which requires an increased use of explosives to extract diamonds.

“The climate has an impact on our machines, but they are adapted to the extreme conditions,” said Mikhail Dyachenko, deputy chief of the mine, standing on the edge of the precipice and wearing a safety helmet.

Alrosa has become more willing to show off its work
“Man will adapt to anything, most of the miners are natives of the region. They know this climate well,” he added.

Trucks go down the mine slowly, spiralling down thin dirt roads dug into the rock. The descent can last up to an hour.

In each ton of ground, there are around 6.2 carats of diamonds. After sorting, the rough diamonds are transported on secret flights to be sold around the world.

Some are flown to polishing centres in Moscow and Smolensk, a city in Western Russia.

The process takes place under heavy security, which was tightened further since a small gang of employees stole three million dollars worth of diamonds last month.

The diamonds were later recovered.

Mirny was founded in the mid-1950s after the discovery of the first diamonds. Its first mine functioned until 2001, and it was closed down in 2017 after a flood killed eight people.

It’s a man’s world
Last year several dams built by the company broke and villages around Yakutia’s Vilyuy River said they could no longer use it as a water source.

Russia’s environment watchdog estimated the damage to the Vilyuy basin at 22.1 billion rubles (over $330 million, 290 million euros) but said Alrosa would not be held accountable as the accident was caused by a natural disaster.

Separately, the company said in April it would provide 833 million rubles ($13 million, 11.5 million euros) over five years for a programme to improve the quality of drinking water in the river area.

Miners are exclusively men, predominantly from the region but also from the rest of Russia. Planes or helicopters carry the miners to the sites, where they work eleven hours a day for two weeks, then have a two week break.

“Local, indigenous communities lived here, and still live nearby—they are reindeer herders, but some of them go to the city to look for work,” said Dmitry Averyanov, who drives trucks that survey the mines.

As for the future, Alrosa is looking for ways to re-open Mirny’s mine. Works are not due to start before 2024 and their cost is estimated at 73 million rubles.