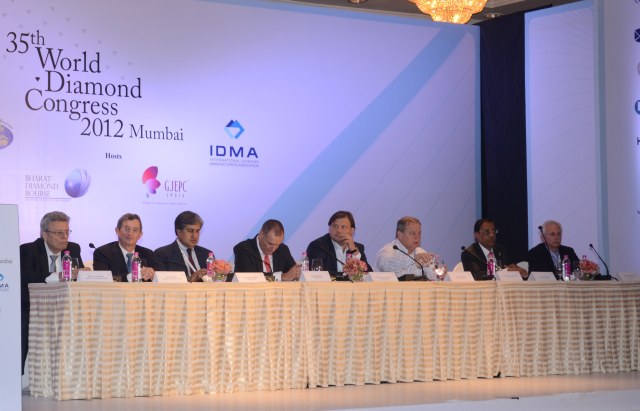 The 35th World Diamond Congress has taken strong exception to the Diamond Source Warranty Protocol, a chain of custody initiative announced by a group of American organizations.

Addressing a press conference at the conclusion of the congress on Wednesday, Earnest Blom and Maxim Shkadov, the new Presidents of the World Federation of Diamond Bourses (WFDB) and the International Diamond Manufacturers Association (IDMA) respectively, said their organizations would enter into “immediate and intense” dialogue with their American colleagues to resolve this matter. The initiative was announced by the Jewellers of America (JA), the Jewellers Vigilance Committee (JVC) and the Diamond Manufacturers and Importers Association (DMIA). Blom said the congress had not come up with a resolution on the idea of imposing a levy on rough sales by miners to fund generic promotions. However, the idea was going to be taken forward. “Both the WFDB and IDMA will talk to the producers to discuss the feasibility of this,” he said. “We don’t exist in isolation. If they don’t have a robust mining business, we won’t have raw material supply. If we aren’t able to promote or product, they won’t have a market to sell to,” he added. He noted that the WFDB’s World Diamond Mark initiative, which was still in the process of being rolled out, offered the potential to generate substantial funds for the industry, which could go towards promotions. “Whichever idea works will be followed up on,” Blom said. Both organizations expressed joint appreciation at the efforts by the Chair of the Kimberley Process to consult all industry stakeholders on the new definition for conflict diamonds and to assure that any decisions made are reached under complete, industry-wide consensus. Blom said the diamond industry was convinced that there was a definite place in the market for synthetics, but that they had to be clearly and completely disclosed. The congress also discussed measures to keep the diamond industry sustainable – primarily ensuring that it was made attractive enough for the new generations to enter into as also attracting new talent. Source: IDEX