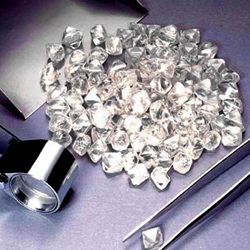 De Beers’s the world’s largest rough producer felt the pain, when only $300 million of the $450 million estimated sight was taken up by their sightholders. This leaves 30 percent of the rough on offer  on the table.

Anglo has previously counted on diamond revenues to offset a collapse in the price of other metals and minerals it mines. Anglo may cut the company’s dividend for the first time since 2009 according to analysts.

This is an indication of turmoil in the $80 billion diamond industry as traders, cutters and polishers suffer from a poor liquidity and weaker demand for jewellery.

Producers in India, where 90 percent of rough diamonds are cut and polished, may halt imports over the supply glut.