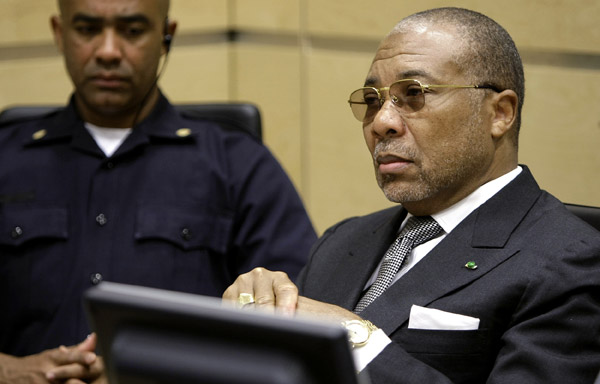 Boycott of the trial by former Liberian President Charles Taylor could delay its conclusion indefinitely.

The war crimes trial of Charles Taylor at the Special Court for Sierra Leone in The Hague was set to close this week. However, the final proceedings may now be delayed in much the same manner that the opening was postponed just over three years ago: amidst a boycott by the former Liberian President.

Testimony was supposed to close the trial this week, with the defense scheduled to present its closing arguments on Wednesday and rebuttals taking place on Friday. However, true to the drama that has beset the trial from the start, Taylor’s lawyer, Courtenay Griffiths, stormed out on Tuesday to protest the court’s refusal to accept the defense’s final written case summary.

The court reasoned that the document was filed some 20 days late, while Griffiths argued that he had requested an extension on the January deadline. He explained that the submission of his defense summation was contingent on rulings on eight legal matters that were rendered after the filing deadline.

The British lawyer said he would boycott the hearing until the document was accepted.

Following his lawyer’s example, Taylor “waived his right” to attend Wednesday’s hearing. As the defense appeals the court’s rejection of its summation document, the closing could be delayed indefinitely.

It is not the first time Taylor has halted the trial. Back in June 2007, Taylor boycotted the opening sessions and dismissed his initial legal team, causing a delay of six months until new counsel was assigned.

The trial has been a long, drawn-out process. Since January 2008, the court has heard evidence from 94 prosecution witnesses and 21 for the defense and has admitted 1,093 exhibits. Its very nature has also been a sensitive one, with the location moved from Freetown to The Hague so as not to evoke too much emotion amongst the local Sierra Leone population.

The issue of whether the boycotts are defense tactics or legitimate legal protests will hopefully be ironed out by the procedural decisions of the presiding judges sooner rather than later. The population of Sierra Leoneans would surely like to put this final chapter of its ugly civil war to bed – with justice served.

Rather than divert attention to the procedural issues facing the court, it is worth stressing what is at stake for the people of Sierra Leone, as well as for the diamond industry in these penultimate moments of the trial.

It may be easy to forget that the tragic civil war in Sierra Leone, the backdrop to the trial, still burns in the memories of the people of that country, with hundreds of thousands dead and countless limbs dismembered, as many of the prosecutor witnesses testified. It was also this conflict that ultimately led to the establishment of the Kimberley Process Certification Scheme (KPCS) in 2000, to stem the flow of conflict diamonds used by rebel movements to finance wars against legitimate governments.

Prosecutors allege that during Taylor’s term as Liberia’s president between 1997 and 2003, he “created, armed, supported, and controlled the Revolutionary United Front (RUF) in a ten-year campaign of terror against the civilian population of Sierra Leone,” from his neighboring Liberia. In addition, prosecutors assert in their written summation that Taylor directed and facilitated RUF’s control of the diamond mining areas so that “many millions of dollars worth of RUF diamonds – mostly mined by civilians under conditions amounting to slavery – were delivered to Taylor.”

As a result of these allegations, Taylor faces an 11-count indictment for crimes against humanity, war crimes and violations of international humanitarian law. These are listed by the court as follows:

Taylor is the first African leader to face an international tribunal and has pleaded innocent to all charges. Rather, he claims to have been at the forefront of brokering peace between the Sierra Leone government and the rebels.

Griffiths, whose written summation was not accepted by the court for the aforementioned reasons and therefore had not been published at press time, has argued bias by the court. He has further claimed a U.S.-led conspiracy against Taylor, citing cables written by U.S. diplomats stationed in the West African country and leaked by WikiLeaks to major media outlets, which then published them. It appears to be the case that Griffiths is clutching at straws, both in his government conspiracy claim and regarding what are perceived as delay tactics.

Either way, the diamond industry should be following these events closely, particularly as it continues to face conflict-diamond-related reputational challenges, vis-a-vie a weakened KP and a manipulative member in Zimbabwe. The conclusion of the Taylor trial will hopefully not only bring some closure to the people of Sierra Leone, but also strengthen the diamond industry’s resolve to react to human rights violations with a sense of urgency. After all, the industry’s vulnerability to the ethical challenges posed by manipulative dictators remains as relevant today as during the presidency of Charles Taylor.