Western Australia has reduced its diamond royalty rate by a significant 33.3 per cent, a move that has been welcomed by Gibb River Diamonds.

The company’s lobbying has led to the reduction of the state diamond gross royalty rate from 7.5 per cent to 5 per cent.

Gibb River stated that the royalty change was in line with the recommendations of the Mineral Royalty Rate Analysis report.

“The board of (Gibb River) believes that the reduction of the diamond royalty will have a very positive effect on the sector and is an extremely helpful step in further (Gibb River’s) aim of becoming a profitable diamond producer in Western Australia,” the company stated in an ASX announcement.

The rate is comparable to the 5 per cent royalty rate applied to Rio Tinto’s Argyle diamond project in Western Australia as of May this year, which was amended from the 7.5 per cent rate in 2006 when Rio Tinto decided to proceed with underground mining.

Gibb River operates the Ellendale diamond project in the West Kimberley, which supplies over 50 per cent of the world’s fancy yellow diamonds every year.

The rare colour had driven United States jeweller Tiffany & Co to ink a six-year deal with Ellendale’s former operator, Kimberley Diamonds, for the supply of the diamonds in the past. 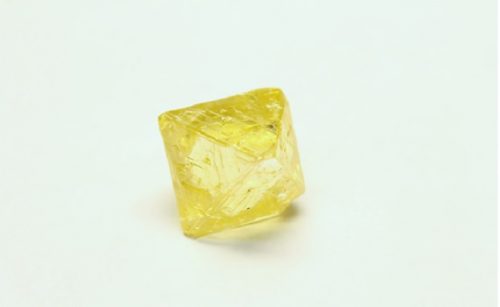 AGD Diamonds, the firm that operates and owns the Grib diamond mine in northern Central Russia announced it has recovered a gem-quality, deep lemon yellow diamond, weighing 47.61 carats, on July 13, 2019.

The stone was found during the ore processing at Grib’s processing plant. In a news release in Russian, AGD said the diamond is of an extremely rare deep lemon hue and is classified as a “high end stone.” Experts noted its perfect octahedral shape and its high – flawless – clarity.

The company noted that the stone has been recovered undamaged thanks to the mine’s innovative, advanced mining technologies and processing by means of its XRT system.