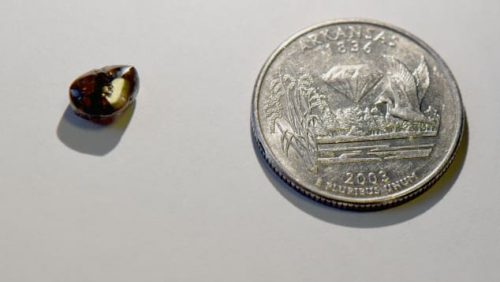 This Nebraska teacher will surely win show-and-tell once the school year begins.
Josh Lanik, 36, was vacationing with his family when he discovered a brandy-colored gem at Crater of Diamonds State Park in Murfreesboro, Arkansas. 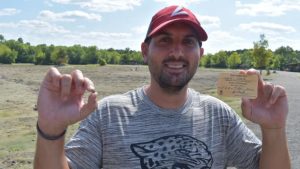 Josh Lanik’s family was ready to give up.

The gem-hunting novices were “over” their search at Arkansas’ Crater of Diamonds State Park after a hot morning with nothing to show buts rocks and glass, Lanik told The Washington Post. Everyone thought it was time for lunch.

Then, the Nebraska teacher stumbled on a shiny brown stone about the size of a jelly bean.

He plucked it from the gravel and took it back to the Murfreesboro park’s offices, making sure to put it in his bag rather than his pockets on the advice of park staff, who had seen many visitors lose their precious finds. A woman took the gem into a backroom in a pill bottle.

She emerged with a smile on her face, Lanik recalled. At 2.12 carats, the diamond was the biggest found in the park this year.

“They were all sorts of excited,” Lanik said.

The Lanik family was less jubilant. Tweeting about the family’s vacation that day, Lanik didn’t even mention the gem. The 36-year-old from Hebron, Neb., figured it wasn’t that special at a place where vacationers regularly pay up to $10 to dig in a 37-acre field atop an old volcanic crater.

Visitors have unearthed and registered almost 300 diamonds at the Crater so far this year, according to the park, which says its fields hide brown, yellow and white gems. The total 2019 haul amounts to about 54 carats, and 11 of this year’s diamonds weighed at least one carat.

But Lanik’s find stood out for its size. The average diamond found at the Crater is about one-fifth to one-fourth of a carat, the park says.

Heavy rainfall probably helped Lanik’s search by uncovering gems, which glint and catch the eye of diggers, park interpreter Waymon Cox told Arkansas State Parks. Park staff found lots of diamonds at the ground’s surface after 14 inches of rain on July 16 but nothing like Lanik’s 2.12 carats.

“Are you going to retire now?” Lanik said one of his former students texted him after seeing the news.

But size is just one factor in a diamond’s value, and when Lanik had the gem appraised in Little Rock, he found it’s “not worth near as much as you’d think,” he said. Uncut or “raw” gems, as well as brown diamonds, are less valuable than a cut or white gem, and the Lanik family’s stone is marred by a fissure. Lanik declined to share the estimated value, but even cut brown diamonds of similar size can be found on eBay for less than $1,000.

Lanik said he plans to put the diamond into a ring for his wife to wear and eventually pass down to their sons. Finding the gem made the long, hot day of digging worth the effort for Lanik and his wife — but he is not so sure about the attitudes of his boys, 6 and 8 years old.

“I think they were just hungry at that point,” Lanik said.