A sapphire and diamond bracelet fetched more than double its high estimate at Sotheby’s Geneva auction, selling to a female Asian collector after a bidding war.

The piece contains a 47.07-carat, royal-blue Burmese sapphire center stone with high clarity, cut in a cabochon shape and flanked by two pear-shaped white diamonds weighing 9.27 carats and 8.60 carats. Created by Cartier in 1927, the bracelet fetched $6.1 million against a high estimate of $3 million, and earned one of the highest prices at auction for an Art Deco bracelet.

In total, the Magnificent Jewels and Noble Jewels sale on Wednesday brought in $53.9 million, with 80% of lots sold, more than half of which exceeded their estimates.

The bracelet spearheaded a strong showing for Art Deco pieces, which achieved a combined $9.6 million at the sale, against a high estimate of $6 million, Sotheby’s noted.

A set of diamond jewels by Moussaieff, including a necklace, earrings and a bracelet, brought in $2.7 million. The collection was estimated at $2 million to $4 million.

Other notable items, many of which sold for well above their estimates, included a sapphire and diamond necklace set with a 14.97-carat Kashmir sapphire. The piece, dated 1890, fetched $1.4 million against its upper estimate of $800,000, while an emerald and diamond pendant-brooch combination, created by Cartier in 1927, garnered $1.1 million, smashing its $250,000 high estimate.

Meanwhile, Sotheby’s sold 93% of the jewels on offer from an Asian-American private collection, fetching a total of $12.7 million, against a high estimate of $8.9 million, the auction house said. The sale noted strong activity from Asian collectors, approximately half of whom were female buyers, more than double the number of women purchasers five years ago, Sotheby’s added. 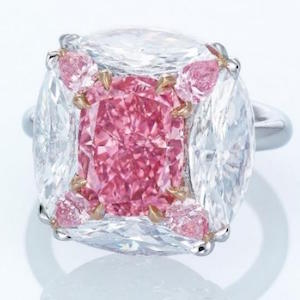 The ring was designed by Moussaieff and features the Cushion weighing 3.43 carats diamond as well as pear shaped pink diamonds and marquise cut white diamonds.

The estimated was $6 million to $8 million.

The ring was the top selling lot at the Magnificent Jewels sale.