Lucara Diamond Corp. is pleased to announce the recovery of a 1,174.76 carat diamond from its 100% owned Karowe Diamond Mine located in Botswana.

The diamond, measuring 77x55x33mm, is described as a clivage gem of variable quality with significant domains of high-quality white gem material, and was recovered from direct milling of ore sourced from the EM/PK(S) unit of the South Lobe.

The 1,174.76 carat diamond was recovered in the Mega Diamond Recovery XRT circuit. On the same production day, several other diamonds of similar appearance (471 carat, 218 carat, 159 carat) were recovered at the main XRT circuit, indicating the 1,174 diamond was part of a larger diamond with an estimated weight of > 2000 carats.

The MDR is positioned after the primary crusher, ahead of the autogenous mill, and is the first opportunity for diamond recovery within the circuit.

Lucapa Diamond Company has recovered a 215-carat diamond from the Mothae kimberlite mine in Lesotho, Africa.

The discovery is the largest Type IIa D-colour white diamond recovered through the 1.1 million tonnes a year Mothae plant since mining operations commenced in January 2019.

Lucapa managing director Stephen Wetherall said the continued recovery of large diamonds at Mothae validated its recent investment decision to expand capacity at the mine.

The company plans to expand Mothae’s processing capacity by around 45 per cent to 1.6 million tonnes a year.

This is scheduled for completion in the first quarter of 2021.

“Lucapa has now produced 23 (100-carat-plus) diamonds, four of which are greater than 200 carats (across the two mines) and we, together with the (Government of the Kingdom of Lesotho) as mine partner in Lesotho and Endiama and Rosas & Petalas as mine partners in Angola, look forward to many more such exceptional mining recoveries,” Wetherall said.

The Lesotho Government holds a 30 per cent stake in the Mothae mine, with Lucapa holding the remaining 70 per cent.

Lucapa Diamond Company and its partners have announced the recovery of the 18th +100 carat white diamond by Sociedade Mineria Do Lulo (SML) from its Lulo alluvial mine in Angola.

Lucara Diamond Corp. has unearthed a 549-carat white diamond at its Karowe mine, the fourth-largest stone in the history of the Botswana deposit.

The unbroken stone, which is of “exceptional purity,” is the first large diamond Lucara has recovered using its Mega Diamond Recovery (MDR) equipment, the miner said Wednesday. The unit, which the miner commissioned in 2017, is specifically designed to recover large stones early in the extraction process to reduce the risk of breakage.

The rough stone is worth $15 million to $20 million, according to an estimate by Berenberg investment bank. However, it could potentially sell for more, the bank added.

The diamond came from the high-value EM/PK(S) portion of discovery of Karowe’s lucrative south lobe, Lucara noted. The same area yielded a 176-carat, gem-quality stone earlier this year, and was also the source of the 1,758-carat Sewelô, the 1,109-carat Lesedi La Rona and the 813-carat Constellation.

“Lucara is extremely pleased to be starting off 2020 with the recovery of two large, high-quality diamonds that build on the positive momentum generated following the completion of a strong fourth-quarter sale in December,” Lucara CEO Eira Thomas said.

Lucara has retrieved six diamonds over 100 carats since the beginning of the year. It will announce its plans for the sale of the 549-carat and 176-carat diamonds shortly. 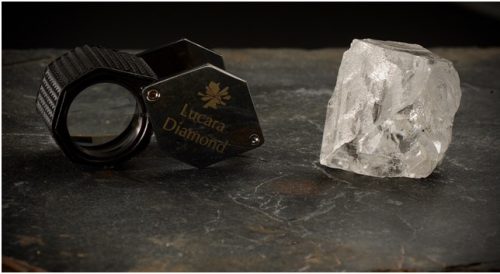 Lucara Diamond Corporation has recovered a 327 carat top colour gem diamond from its one hundred percent owned Karowe diamond mine in Botswana.

Eight rough diamonds larger than 100 carats have now been recovered at Karowe since the beginning of the year, including a 472 carat rough diamond announced earlier this month. 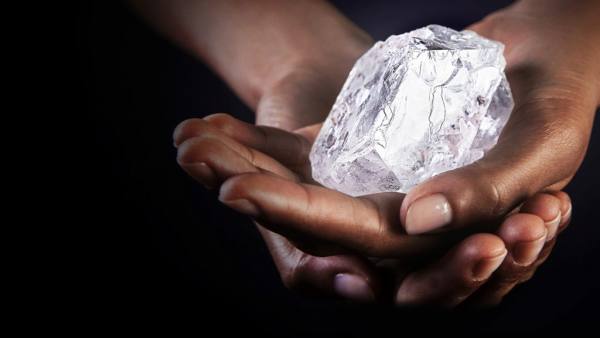