The International Gemological Institute (IGI) has graded a 27-carat lab-grown stone that it claims is the world’s largest polished synthetic diamond.

Along with Om, the IGI graded two additional lab-grown stones submitted by Greenlab, including Shivaya, an emerald-cut diamond weighing 20.24 carats, and Namah, a pear rose-cut, 15.16-carat polished. Greenlab plans to display the diamonds at the JCK Las Vegas show, it noted.

At the time, the largest polished lab-grown diamond of any sort the GIA had examined was a cushion-cut, 20.23-carat, fancy-vivid-yellowish-orange, VS2-clarity diamond created using the High Pressure-High Temperature (HPHT) method in 2019.

The new Diamond Charter calls for tight measures to prevent the misuse of certificates. It also requires companies to take action to stem the circulation of grading reports that are not attached to a stone.

The document, which the Gem & Jewellery Export Promotion Council (GJEPC) posted on its website last week, mandates ethical conduct and grants powers to punish those who misbehave. It is currently at the consultation stage, and could go into effect next month, GJEPC executive director Sabyasachi Ray told Rapaport News Monday.

“[Since] lab-grown diamonds came into the market, above [0.30 carats], no natural diamond is sold without a certification,” Ray explained. “This [underpins] the value of the diamond.”

The rules require grading institutions to give each diamond a unique identification number and a corresponding laser inscription when they receive it for certification, and to keep an accessible online archive of reports. They also compel labs to offer free verification services at major trading centers and maintain records of know-your-customer (KYC) documents.

Meanwhile, bourses must remind their members that trading of a certificate without the sale of a diamond is illegal, according to the charter.

The guidelines also govern what happens if a seller has multiple grading reports from different labs for the same stone and only wishes to give the buyer one of them. In this case, the seller should return the remaining certificates to the lab or destroy them within 30 days so misuse of the document is impossible, the charter continues.

The boards of the BDB and the GJEPC have approved the charter, with members of exchanges and the general public now able to comment on the draft before November 16, Ray said. Depending on feedback, implementation could happen by December 1, he added.

“Our understanding is that the charter is in draft; we look forward to learning more about it,” a GIA spokesperson said. “For many years, GIA has supported the efforts of trade bodies, including the GJEPC, in addressing issues of importance to the trade and to advance consumer protections.”

While grading fraud has been an issue for years, the phenomenon has become especially common since the rise of lab-grown diamonds.

In August, police in India discovered a scam in which people had sold low-quality diamonds bearing counterfeit certificates, a number of them involving forged GIA report numbers. Some of the stones were lab-grown but carried natural-diamond reports.

In May, the GIA reported a rise in submissions of lab-grown diamonds with counterfeit inscriptions.

Clarification, November 9, 2021: This article has been updated to clarify that not all the named organizations have signed up to the charter, which is still in a draft stage. A quote from the GIA has also been added.

With a finished weight of 12.75 carats, this collection-quality man-made gemstone was fashioned from a 46.20 carat CVD-grown rough crystal.

According to its creator, Shanghai Zhengshi Technology, it is the largest CVD lab-grown diamond ever produced.

“For the past 15 years, IGI has been at the forefront of lab-grown certification and education,” stated IGI CEO, Roland Lorie. “With this milestone, the Institute continues to establish itself as the prominent leader in the industry and opens the door for future opportunities to exceed current gemological standards.”

Following detailed scientific analysis, the laboratory substantiated that the stone had not undergone any post-growth treatments, so it can be categorised as a pure CVD diamond.

“A laboratory-grown diamond of this carat weight, with such a high clarity and color grade, is a remarkable achievement in CVD cultivated diamond technology,” said IGI Hong Kong managing director, Bob Van Es. “As the industry leader in the certification of laboratory-grown diamonds, IGI will continue to follow these new developments closely.”

The International Gemological Institute (IGI) recently graded a 116-carat, black synthetic diamond that ranks as the largest lab-grown diamond of its color.

Meylor grew the diamonds as part of its “World’s Largest Black Diamonds Project,” which it began at the beginning of the year. However, it intends to try for a larger one in the future. The larger stone holds the Guinness World Record for its category, IGI reported.

“The significant milestone of [over 100 carats] in diamond size was achieved by our company in a very short time, and the next even more promising target of [over 200 carats] is right now under deep scientific investigation,” Kusher added. 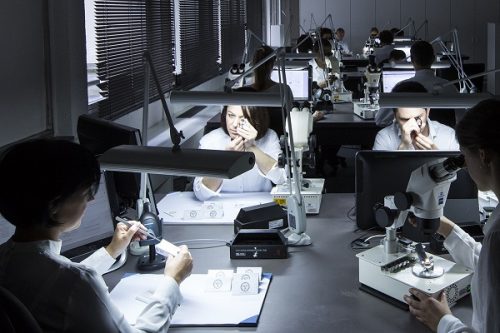 “The interest of this large conglomerate to invest in IGI shows the confidence it has in our industry,” said Roland Lorie, IGI’s CEO. “As demand for certification increases, the investment…will significantly accelerate our core business, offering and presenting many new opportunities all over the globe.”

Fosun will implement the acquisition through Yuyuan, its holding company for the consumer sector, IGI explained. The Lorie family will retain a 20% interest, with Roland Lorie still managing the company. Marc Brauner, who was previously Lorie’s co-CEO, has left IGI after 30 years with the group. The parties did not release any further financial details.

Antwerp-based IGI, founded in 1975, operates 23 laboratories and schools around the world. Fosun is one of China’s largest corporations, spanning the financial, health-care, pharmaceuticals, consumer, real-estate, mining and energy industries, with Club Med and Cirque du Soleil among the brands it owns. It bid to acquire Gemfields last year, but lost out to Pallinghurst Resources.

“IGI has built great fundamentals and human capital over the years, with highly respected expertise and input from both the Lorie and Brauner families,” said Xu Xiaoliang, executive director and copresident of Fosun and chairman of Yuyuan. “We believe IGI is well positioned to bring its gemological knowledge and expertise to emerging markets, including China.”