New models in Harry Winston’s Ocean Biretrograde collection reaffirm the brand’s status as one of the world’s most important purveyors of diamonds. Before the Swatch Group acquired Harry Winston in 2013, it was owned by Dominion Diamond company, the joint venture partner in Canada’s first diamond mine, Ekati, which entitled the company to first pick of run-of-mine gems.

Previous to that, it was owned by the Winston family. It was founded by Harry Winston, whose nickname, “the King of Diamonds,” resulted from his having acquired and sold some of the world’s top diamonds: the 726-carat Jonker; the 94.80-carat Star of the East (which he later sold to the Duchess of Windsor); and the storied 45.52-carat fancy blue Hope Diamond.

The Swatch Group has been careful to honor the legacy of Harry Winston, setting most ladies’ models, and some men’s, with diamonds new pieces in the Ocean Biretrograde Automatic 36mm collection and the more petite Emerald collection.

The Emerald collection is named after the shape of founder Harry Winston’s favorite diamond cut, the emerald. New 18k yellow and white gold models are ideal cocktail watches, at 18mm wide. They come with either a flexible Milanese woven bracelet or a classic satin double tour strap.

And now for the finale of the 2020 lineup: the Precious Cluster, set using Mr. Winston’s signature clustering technique with over seven carats of pear and trillion-cut diamonds, and the Winston Cluster, the high jewelry version with brilliant, marquise, and pear-cut diamonds totaling over 25 carats. The Cluster is a perfect response to the line, “Talk To Me Harry Winston!” from the 1953 song “Diamonds Are A Girl’s Best Friend.” 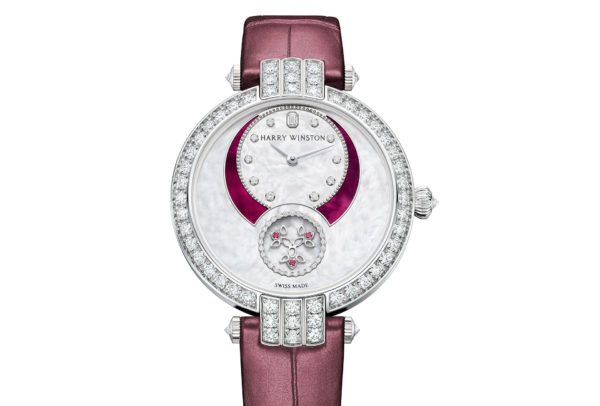 The new Premier models in mother of pearl have extraordinary show of depth.

With the Automatic 36 mm Harry Winston has embraced the theme of nature. The Caliber HW 2014, which provides a power reserve of 72 hours.