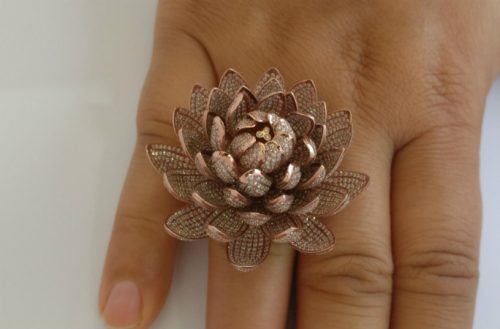 Two jewellers from India have broken the record of Most diamonds set in one ring, by setting a staggering 6,690 diamonds into an 18 karat rose gold structure, shaped like a lotus flower.

Vishal Agarwal and Khushbu Agarwal, both based in Surat, Gujarat, constructed the ring using a base component and 48 individual diamond encrusted petals.

The lotus ring weighs more than a golf ball, with a total weight of just over 58 grams.

It took six months to design and craft the intricate ring, which has been valued at $4,116,787 USD.

Vishal created the design for the ring, and Khushbu, who owns Hanumant Diamonds, funded and provided the resources for the ambitious project.

The ring was manufactured by Hanumant Diamonds artisans, based in Mahidarpura, Surat.

The lotus ring took the record from Savio Jewellery’s Peacock Ring which earned the record in 2015, with 3,827 cut diamonds.

The idea for Vishal and Khushbu’s creation came from them wanting to raise awareness about importance of water conservation.

They decided to use their work to generate awareness and settled on a lotus flower design because it is the national flower of India, and because it depicts “the beauty growing in the water-world”.