Alrosa Spectacle, a 100.94 carat diamond that is thought to be the largest ever cut in Russia, will be auctioned in Geneva later this month.

“This fantastic 100 carat D color diamond was cut from a rough stone that originally weighed more than 200 carats. It was called the Sergei Diaghilev rough diamond and it was mined in 2016,” Marie-Cecile Cisamolo, a specialist in the auction house’s jewelry department, said.

“Between the rough and diamond that we’re offering today, it took one year and eight months to cut into this perfect stone.”

The diamond is one of 144 lots on offer in the sale, which also includes rings, earrings, brooches and other pieces made with diamonds, sapphires and rubies.

Nemesis International on Thursday unveiled a 313 carat diamond that has been certified as the largest D colour polished stone in history.

The emerald shape, VVS1 clarity diamond, known as Constellation 1, is one of eight stones that make up a collection manufactured from the 813 carat Constellation rough, which Nemesis bought in partnership with Swiss jeweler de Grisogono for $63.1 million in 2016. At $77,613 per carat, the stone still ranks as the most expensive rough diamond ever sold.

Tom Moses, executive vice president and chief laboratory and research officer at the Gemological Institute of America, confirmed with Rapaport News that the stone was the largest graded D colour diamond on record.

However, Nemesis has no immediate plans to sell the diamonds, CEO Konema Mwenenge told Rapaport News on the sidelines of the Dubai Diamond Conference. “We want to showcase this as the work of art that it is,” he stressed. “Diamonds are not just a commodity and this stone is impossible to value. We’re focused on building its legacy.”

The company is considering a roadshow to display the collection around the world at museums and other platforms. “We want to keep them as a family from the same rough,” Mwenenge added. The eight stones vary in size and shape, and range in clarity from flawless to internally flawless and VVS. The second largest stone in the family is a 102 carat diamond.

The diamonds will also be presented in their full polished form for now, but will eventually be mounted into jewelry. That contrasts with the company’s last major project, the Art of de Grisogono, an emerald cut, 163 carat, D flawless diamond, cut and polished in New York from a 404 carat rough diamond. That piece was sold as a necklace that could also transform into a bracelet, fetching $33.7 million at a Christie’s auction. 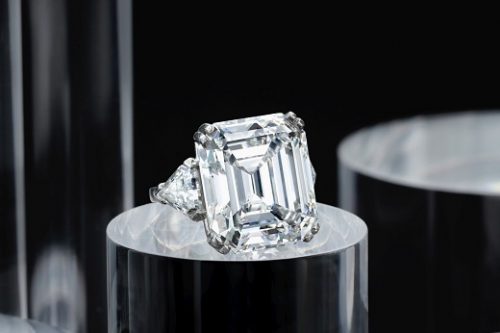 The emerald cut, G color, VS2 clarity ring flanked by trillion cut diamonds led the company’s New York Fine Jewelry sale. It was the first time the stone which was from a private collection had appeared at auction.

“We saw some fierce bidding for this magnificent diamond and are delighted with how well it performed,” said Caroline Morrissey, head of sales for Bonhams Jewelr, US.

The auction brought in a total of $4 million, according to Rapaport calculations, which Bonhams declined to confirm. The auction house will hold its Fine Jewelry sale in London on Wednesday, featuring a 24.31 carat diamond estimated at $1.7 million to $2.3 million.