A romantic marriage proposal is a significant milestone in many people’s lives.

Engagement rings can also cost tens of thousands of dollars and are commonly stolen in home invasions.

Jewellery experts are urging engaged couples to get the girdle of the diamond engraved so they can’t as easily be pawned.

This microscopic serial number could be enough to get the ring returned, and save newlyweds potentially hundreds of dollars a year in insurance premiums.

Roy Cohen, a third-generation diamond grader originally from South Africa, said these minute inscriptions increased the chance of a stolen ring being reunited with its rightful owner.

‘It’s invisible to the naked eye, it can only be seen with magnification but it’s basically a serial number,’ he told Daily Mail Australia.

‘Usually what happens is, at any pawn shop, they will take a jeweller’s loupe and they will actually have a look at the item.

‘If there’s a certificate number on the girdle of the diamond and the diamond’s been sold without the certificate, usually that does raise alarm bells.’

Mr Cohen, the director of Diamond Certification Laboratory of Australia, said engraved serial numbers on diamonds could be checked against a database, arguing this was more effective than leaving a diamond un-engraved and relying on police detective work to find a stolen item.

‘If somebody steals a diamond ring from a house in Sydney and then goes to sell it in Melbourne, there’s no way that they’re going to get found out because there’s not a lot of co-operation between states,’ he said.

His DCLA company began inscribing diamond rings in Australia in 2001, following his move from Johannesburg to Sydney.

It has now formed a partnership with underwriter Woodina to form Certified Diamond Insurance, which only insures jewellery with an inscribed serial number.

Mr Cohen, who has three decades of experience as a diamond grader, vowed customers could save up to 50 per cent off their premiums compared to traditional home and content packages.

Jewellery is the third most stolen item stolen from Australian homes, after cash and laptops, an analysis of official burglary figures by insurer Budget Direct found. 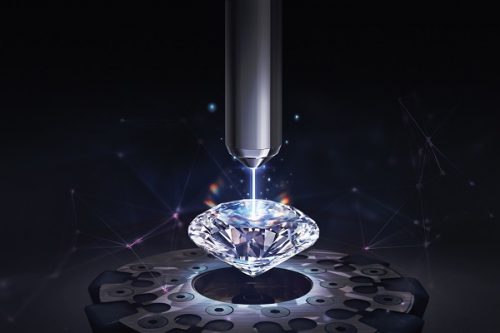 The question of whether a diamond could be traced throughout the distribution chain initially met with some skepticism. Back in 2011, as rough production from Zimbabwe’s controversial Marange fields was being cleared for export by the Kimberley Process, the goods were still banned in the United States (as they remain today). It was therefore necessary to separate the Marange goods during the production process if manufacturers were to continue supplying both the US market, and jewelers in other centers that were willing to buy the Zimbabwe rough.

Back then, manufacturers gave contrasting responses on whether such separation was possible, as factories tended to aggregate their supply from different mines into size and quality categories. Today, we know it is indeed possible, thanks to technology such as radio-frequency identification (RFID).

But what happens once the diamond leaves the factory? Or even before it arrives from the mine?

With millennials raising the bar when it comes to ethical consumption, these questions need to be answered. In fact, millennials are not so much demanding that the diamonds they buy be responsibly sourced, as assuming it to be the case.

That tells us two things: First, the cost of not being able to vouch for your supply is extremely high, and second, consumers value the story of traceable diamonds if it is told to them.

That’s not to say such diamonds will sell at a premium in the long term. Rather, we expect that source-verification programs, with innovative marketing behind them, will become a standard feature of diamond sales. In that sense, today’s early adopters are setting themselves up for success.

In the October issue of the Rapaport Research Report, we try to identify the added value these programs provide. We also assess the most effective ways to trace a diamond, focusing on some of the more innovative programs available today.

Are blockchain systems, which record the data flow associated with the diamond, enough, or should we focus on programs attempting to track the physical stone? Would it be more productive for retailers to build their own platforms to trace their diamond supply back to the source? Or is it better for miners, manufacturers, and third parties such as the grading labs to provide tracking services that retailers can tap into?

The last year or two has brought examples of all of the above, many of which are still in the pilot phase and likely to need some fine-tuning. It’s encouraging that the trade is engaged in this conversation. The diamond and jewelry industry needs to satisfy ethically conscious millennials and keep up with consumer trends. And even if it’s unclear whether a traceable diamond can sell at a higher price than a non-traceable one, source verification is a necessity moving forward; it’s simply the right thing for the industry to do.