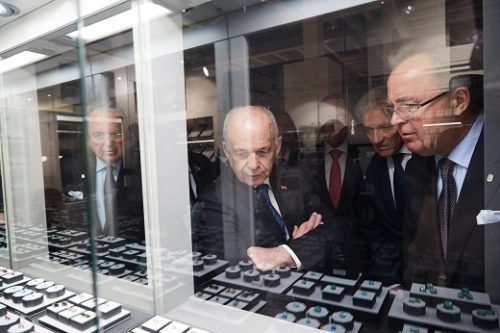 Baselworld will reduce booth prices by 10% to 30% at next year’s show and move diamond dealers to a more attractive location, organizers have confirmed.

Management will reopen Hall 2, which was empty at the 2019 show, and place gem and pearl exhibitors in that area together with a new innovation zone dedicated to smart watches and wearable devices. The plan as it stands would see the innovation center on the ground floor, with gems and pearls one level up.

“This is still at the stage of an idea. It’s possible the gems and pearls sector may be located on the ground floor, but we still have to see what is most appropriate,” Michel Loris-Melikoff, managing director of Baselworld, said in a presentation on Tuesday, the final day of the show in the Swiss city. “What is certain is that they will be in Hall 2.”

Diamond companies’ current location in Hall 3 has been unpopular with many exhibitors, who felt they were too far from the high-end watch and jewelry brands in Hall 1. The number of exhibitors in Hall 3 dropped 10% to 120 at this year’s show, despite a price reduction of 10% to 15%. That compares with a 20% decline in the total number of exhibiting brands at Baselworld to 520, while the visitor count dropped 22% to 81,200.

Loris-Melikoff vowed to slash per-square-meter prices across the show by up to 30% next year depending on the position, as well as simplifying the pricing structure. He noted, however, that booth rental only represented about 15% of the cost of attending the show for average exhibitors.

The 2020 edition will take place later than usual, from April 30 to May 5, so visitors can also attend the Salon International de la Haute Horlogerie in Geneva, which ends April 29, organizers of both shows announced in December. That synchronized schedule will continue until at least 2024.

From next year, Baselworld plans to rebrand itself as an “experience platform” and a community for the jewelry and watchmaking industry, rather than a classic trade fair, it said. To that end, the 2020 show will feature a retailer summit, talks by CEOs, and a virtual-reality zone.

“Our strategy met with strong approval from the exhibitors during the presentations,” Loris-Melikoff noted. “We will tackle change with vigor and passion.”