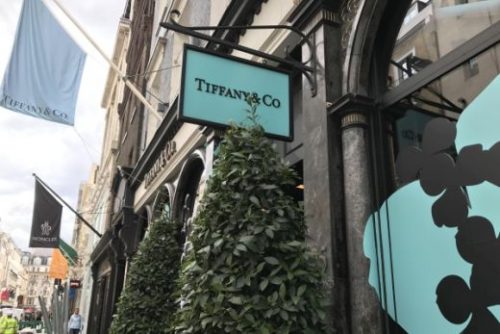 Tiffany & Co. reported record annual sales in 2018, despite the challenging economic environment that caused a slowdown in the fourth quarter.

“In 2018…net sales surpassed levels not seen since 2014,” said Tiffany CEO Alessandro Bogliolo. “Softer trends in the second half of the year reflected, in part, what we believe were external challenges and uncertainties.”

The jewelry retailer’s new marketing strategy, including its “Believe in Love, Believe in Dreams” and holiday campaigns, buoyed sales, Bogliolo noted in a conference call with analysts last week, transcribed by Seeking Alpha.

Worldwide comparable-store sales — at branches open for at least a year — rose 4% at constant currency rates.

Profit for the year jumped 58% to $586 million, its highest in a decade, according to Rapaport records. Earnings were boosted by a lower income-tax rate, which included a $16 million benefit related to the enactment of the 2017 US Tax Cuts and Jobs Act, Tiffany explained.

During the fourth quarter ending January 31, 2019, global sales declined 1% to $1.3 billion, due to softer demand from local customers and foreign tourists. The lower spending was attributable to market volatility and external uncertainties, the company observed.

Profit for the three-month period more than tripled to $205 million versus $62 million a year ago, also as a result of the lower tax payment.

The company expects net sales for 2019 to increase by a low-single-digit percentage over 2018, as the lower foreign-tourist spending it encountered in the fourth quarter continues into the new fiscal year, it said. Higher expenses relating to its six-point program to stimulate growth will also negatively impact earnings, Tiffany noted.

Among its 2019 initiatives, the jeweler is strengthening its message on diamonds via a campaign on social media, accelerating its product renewals and launches, as well as delivering a more exciting omni-channel experience, Bogliolo explained in the analyst call.

Tiffany will begin selling engagement rings on its US website, he added. Phone orders were previously the only outlet for purchasing outside its store locations. Additionally, the company will launch an e-commerce site in China later this year.