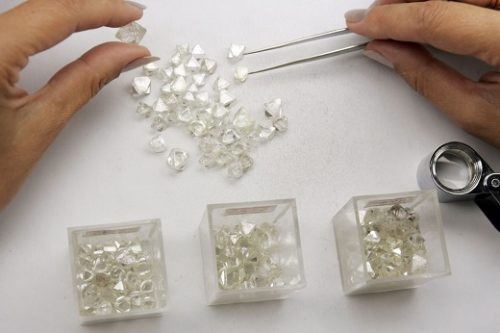 Alrosa’s sales increased in the third quarter amid stronger demand and a move toward larger diamonds, the miner reported.

Revenue from rough stones rose 12% year on year to $949 million for the three months ending September 30, the Russian company said Monday. While sales volume fell 11% to 6.7 million carats, the average price grew 26% to $142 per carat. Prices have climbed 5.2% since the beginning of the year on a like-for-like basis, it added.

Production grew 2% to 10.5 million carats during the quarter as the miner increased ore processing at its Jubilee pipe, and raised output at the Udachny and Severalmaz divisions.

In the first nine months of the year, revenue from rough stones improved 9% to $3.59 billion, and polished revenue increased 9% to $74 million. By volume, sales for the period fell 9% to 29.1 million carats. Production dropped 11% to 26.4 million carats due to the shutdown of the miner’s Mir asset and the termination of open-pit mining at the Udachnaya pipe, Alrosa said.

Alrosa has offered some of its inventory for sale over the past year to offset the lower production. As a result, its stockpiles have decreased 11% to 15.5 million carats as of September 30, compared with a year earlier.