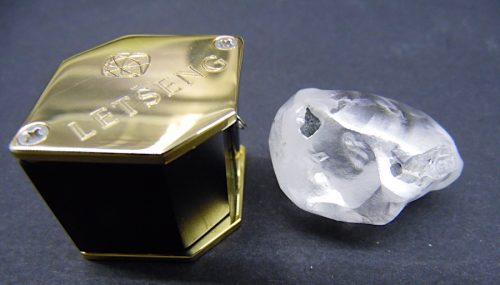 Africa focused Gem Diamonds must be getting used to recovering huge precious rocks from its flagship Letšeng mine in Lesotho, as it has just dug up another massive one.

The largest diamond found this year is a 910 carat  D colour type IIa diamond, about the size of two golf balls, which was named the “Lesotho Legend.”  It became the second largest recovered in the past century and sold for $40 million at an auction in March.

Since acquiring Letšeng in 2006, Gem Diamonds has found now five of the 20 largest white gem quality diamonds ever recovered, which makes the mine the world’s highest dollar per carat kimberlite diamond operation.

At an average elevation of 3,100 metres above sea level, Letšeng is also one of the world’s highest diamond mines.

The biggest diamond ever found was the 3,106 carat Cullinan, dug near Pretoria, South Africa, in 1905. It was later cut into several stones, including the First Star of Africa and the Second Star of Africa, which are part of Britain’s Crown Jewels held in the Tower of London.

Lucara’s 1,109 carat Lesedi La Rona was the second biggest in record, while the 995 carat Excelsior and 969 carat Star of Sierra Leone were the third  and fourth largest.