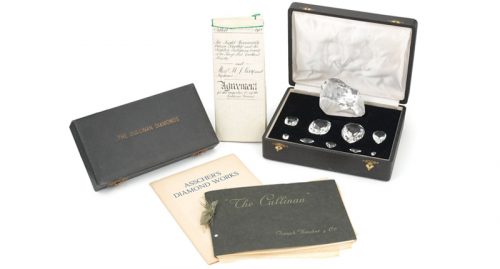 London—A history buff could soon be the owner of the original document outlining the cutting and cleaving of the historic Cullinan diamond.

At Bonhams’ London Jewels sale scheduled for April 30, the auction house will put on the block the historic document that facilitated the cutting of the world’s largest rough diamond.

Dated Jan. 29, 1908, the original manuscript is for the ‘Agreement for the Inspection of the Cullinan Diamond’ between the representatives of King Edward VII and London diamond brokers M.J Levy & Nephews.

This document brokered the handling and cutting of the 3,106-carat Cullinan diamond—which remains the largest gem-quality rough diamond ever discovered—by the renowned Asscher Company to create the nine principal Cullinan Diamonds, Bonhams said.

It appointed M.J Levy and Nephews as “inspectors” of the Cullinan and outlines the parameters and guidelines of how it had to be handled, as well as the duties of each party.

The auction lot includes the original documents as well as a paste replica of the Cullinan as it appeared in its rough form and two replica sets of the nine principal diamonds cut from the stone.

The Cullinan rough diamond was discovered near Pretoria, South Africa, in 1905. So large it was believed to be a piece of rock crystal instead of a diamond, the rough was named after Thomas Cullinan, chairman of the mine where it was found.

The stone initially failed to find a buyer and was eventually sold for £150,000 to the South African Transvaal Colony government in 1907, which then presented it to King Edward VII on his 66th birthday in November of that year as a symbol of South Africa’s loyalty to the Crown, Bonhams said.

After the king received the stone, he was advised by his private secretaries to consult London diamond brokers Messrs M.J. Levy & Nephews about the cutting of the rough given the complexity and risk of the task.

Arthur and Alexander Levy then brokered it to be cut and polished with Asscher in Amsterdam, which had just cut the 995.2-carat Excelsior Diamond in 1903. 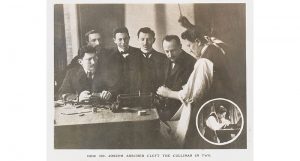 Since it wasn’t possible to shape and polish the stone without splitting it, the responsibility fell to Joseph Asscher, the house’s most skilled cleaver, to do the task.

After studying it at length, Asscher created a 6.5-mm deep incision in the diamond over several days. Then, in February 1908, his first attempt to cleave it ended when the blade on his tool broke as soon as he struck the stone.

After making stronger tools, he tried again the following week, successfully cleaving the Cullinan rough into two parts—one weighing 1,977 carats and the other 1,040 carats.

These stones were further polished and cut in the months following to create nine main stones, 96 smaller diamonds, and several polished “ends.”

Cullinan I remains the largest polished white diamond in the world, weighing 530.20 carats. It sits on top of the Sovereign’s Sceptre.

The Cullinan II, weighing 317.40 carats, is set at the front of the Imperial State Crown, currently located in the Tower of London.

Bonhams said the agreement documents and paste replicas of the stones were handed down through the business and subsequent owners of M.J. Levy & Nephews.

The auction house said this is the first time they are being offered for sale on the open market.