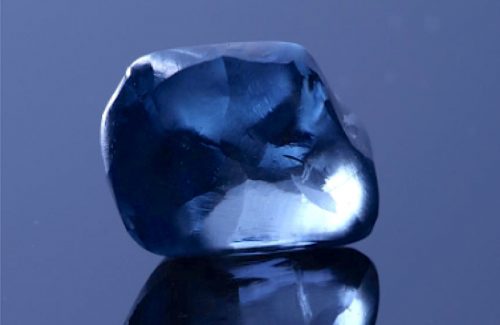 Botswana’s state run Okavango Diamond Company unveiled on Wednesday what is believed to be the largest blue diamond ever discovered in the southern African country, which is one of the world’s top producers.

The 20.46 carat, oval-shape fancy precious rock has been named “The Okavango Blue” in honour of the Okavango Delta, the country’s wildlife rich world heritage site.

From all coloured diamonds, blue stones are the most unusual and so the miner says its find is one of the rarest in the world.

“It is incredibly unusual for a stone of this colour and nature to have come from Botswana a once in lifetime find, which is about as rare as a star in the Milky Way,” Okavango Diamond Company managing director Marcus ter Haar said in a statement.

“It sits in the very top bracket of all time historical blue diamond finds especially because only a very small percentage of the world’s diamonds are classified as fancy colour,” he noted, adding the company expects to sell the stone by the end of the year.

In 2016, a massive intense blue diamond, known as The Cullinan Dream, sold for $25.4 million at a Christie’s auction in New York, breaking all records and becoming the most expensive gem of its kind ever sold at auction.

Last year, a 6.16 carat blue diamond, secretly passed down through European royalty over three centuries, fetched $6.7 million at a Sotheby’s auction in Geneva $1.4 million more than what experts expected it to be sold for.

Botswana, which was overtaken by Russia as the world’s top diamond producing country in 2014, is grappling with aging mines, as well as power and water shortages.

Still, diamonds are the country’s main source of income and account for about 80% of its exports.

The nation is home to some of the world’s most prolific diamond mines, including Lucara Diamond’s Karowe operation, where the now famous Lesedi la Rona, the second-largest gem-quality diamond to ever be found, was unearthed in 2016.