Okavango Diamond Company sold $963 million of rough diamonds last year, said Dennis Tlaang, a company spokesman. The revenue was the most since the company began operations in 2012, he said.

“The demand for natural rough diamonds remained strong throughout 2021 driven primarily by positive market sentiment in key markets such as the United States,” Tlaang said.

Sales may rise further this year after De Beers, the world’s biggest producer of the stones, pushed through one of its most aggressive diamond price increases in recent years. Okavango also got higher than normal prices in the sole auction it held this year, Tlaang said.

De Beers Implements Big Diamond Price Hike as Demand Runs Hot. A Buying Frenzy in Cheap and Tiny Diamonds Sends Prices Soaring. Diamond Sold for $12 Million in Cryptocurrency at Sotheby’s. “We believe this is a good indicator of the market dynamics of 2022, at least for the first half of the year,” he said. “The company will continue to drive customer participation by marketing its rough diamond assortment in key markets such as Antwerp and Dubai.”

Under a 2011 agreement between De Beers and the government of Botswana, Okavango purchases 25% of the nation’s annual production for independent marketing, while the balance is sold through the De Beers’ trading network. 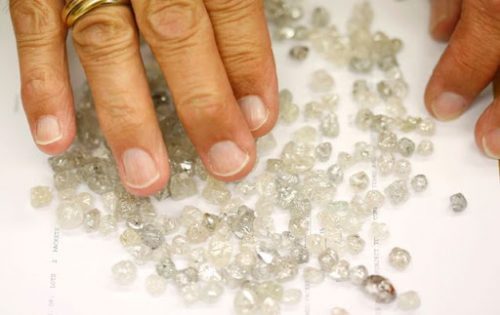 Gem Diamonds has sold its Ghaghoo operation for a fraction of what it cost to build what was Botswana’s first underground diamond mine, as it failed yet again to diversify away from its Letšeng mine in Lesotho.

Gem Diamonds agreed to sell its failed Ghaghoo mine in Botswana to Pro Civil, a local company, for $5.4m USD.

London-listed Gem, which has had a string of setbacks in attempting to diversify its portfolio away from being a single-asset company with its Letšeng mine in Lesotho, invested about $90m in building the first phase of Ghaghoo.

In March 2017, Gem reported a $170m impairment against Ghaghoo after mothballing the mine in the Central Kalahari Game Reserve in February, as low prices for smaller rough diamonds pushed the operation into a loss.

There was no information about the Pro Civil business in the Gem statement on Thursday, and internet searches proved fruitless. No indication was given about what Pro Civil intended doing with Ghaghoo once the deal closes in the third quarter of 2019.

Gem said it had reached a binding agreement with Pro Civil for the sale of the London-listed company’s wholly owned subsidiary Gem Diamonds Botswana for an upfront payment of $5.4m.

“On behalf of Gem, we wish the Pro Civil team well for the future, and I would also like to thank the government of Botswana for its assistance during the sale process,” said Gem CEO Clifford Elphick.

The Botswana subsidiary reported a pretax loss of $4.9m in the year to end-December 2018 and gross assets of $3.9m.

Ghaghoo, when it was officially opened in September 2014, had expected to sell its diamonds for about $260/carat, but by 2017 it was realising prices of nearly half that number.

Ghaghoo, the first underground diamond mine in Botswana, was a difficult mine to build. A decline shaft was sunk through an 80m-thick layer of loose Kalahari Desert sand in a remote location in the north of the country.

Part of the reason to go underground, instead of building an opencast mine, was to reduce the size of the mining footprint in the game reserve to 20km² instead of 100km².

The mining project started in October 2011 and did not come close to reaching commercial production of 150,000 carats a year.

Gem’s attempts to extend operations beyond its Letšeng mine in Lesotho have been unsuccessful — the Ellendale mine in Australia was sold for $15m in 2012 and the Cempaka alluvial mine in Indonesia was closed in 2008.

Exploration efforts in Angola and elsewhere in Africa came to naught.

Gem would now focus on improving Letšeng, said Elphick, adding the $5.4m would be put towards “general corporate purposes”.

“Every little bit will help,” said Shore Capital analyst Yuen Low, pointing out that large-diamond recoveries at Letšeng had been poor recently.

Letšeng is the world’s richest diamond mine when measured by dollars achieved per carat, consistently delivering large, high-quality diamonds.