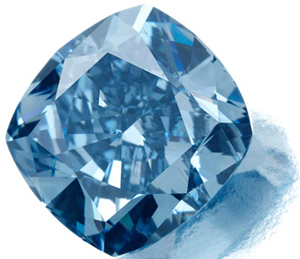 A rare natural fancy vivid blue diamond sold for a world record price of almost US$9.5 million (AU$12.2 million) at auction in Geneva this month.

The internally flawless, cushion-shaped diamond weighing 7.03 carat was produced by Petra Diamonds’ historic Cullinan mine in South Africa, well-known for its production of blue diamonds, and for many of the most significant diamonds ever discovered. This record-breaking blue diamond was cut from a 26.58 carat rough diamond discovered in 2008. The final US$1.35 million per carat price established a new record for a fancy vivid blue diamond sold at auction, and has surpassed the world record per carat price for any gemstone sold at auction. The grading of this diamond was performed by the Gemological Institute of America (GIA), grading it as ‘fancy vivid blue’ in colour and ‘internally flawless’ in clarity – in terms of colour and clarity, this is the top grading that may be achieved for a blue diamond.

The diamond was purchased by a Hong Kong real estate investor, Joseph Lau Luen-Hung, said to be a collector and connoisseur. As the first owner of this diamond, he has exercised his right to name the diamond, known from now as the “Star of Josephine”

Commenting on the sale, Petra Diamonds CEO Johan Dippenaar remarked: “The price achieved at the Sotheby’s auction for this exquisite, internally flawless blue diamond is a world record by value per carat and the highest price to be achieved by a fancy vivid blue diamond, and reflects how incredibly rare and collectable such an important blue diamond is to the connoisseur. The renowned Cullinan mine continues to captivate the world with spectacular diamonds, building on its legacy as the source of some of the world’s most famous gems. This has been a very successful partnership with Sotheby’s, one of the pre-eminent names in jewellery sales, and has provided the perfect platform to garner international recognition for a gem of this calibre.”

Also commenting was David Bennett, Chairman, Europe & the Middle East, Sotheby’s International Jewellery department: “We are absolutely thrilled with the price achieved for this exceptional stone, which ranks as the highest price ever established for a fancy vivid blue diamond. It has been a real privilege to offer a diamond of this importance as the centrepiece of our sale and we have seen it capture the imagination of collectors around the world – particularly in Hong Kong, New York, London and Geneva, where we have exhibited it over the last few weeks. It has also been very exciting and rewarding to work so closely with Petra Diamonds and to follow the progress of this remarkable gem over the last few months; from its emergence in its initial rough state, through its various stages of cutting and polishing, to its auction success on the international stage this evening.”