US authorities are investigating a massive theft of jewelry from a Brink’s armored vehicle in California last week.

The executive estimated the losses at $100 million to $150 million. Brink’s put the value at less than $10 million, according to media reports — a discrepancy explained by the practice of vendors underinsuring goods, Swanson noted.

“They all have invoices and paperwork to show the higher value,” Swanson said.

The theft occurred early on July 11, according to a spokesperson for the Federal Bureau of Investigation (FBI) in Los Angeles, which is investigating the case together with the Los Angeles County Sheriff’s Department.

On that day, deputies from the Sheriff’s Department station in Santa Clarita, California, were called to the “Flying J” rest stop and gas station in the mountain community of Lebec in response to the burglary of a cargo container.

They “learned that several pieces of jewelry and gemstones valued at several million dollars were stolen from a locked ‘Brink’s’ tractor trailer by unknown suspects,” the department said Monday in a report.

“According to the information the customers provided to us before they shipped their items, the total value of the missing items is less than $10 million,” Brink’s said in a statement quoted in the US media. “We are working with law enforcement, and we will fully reimburse our customers for the value of their assets that were stolen, in accordance with the terms of our contract.” The company did not respond to a request for comment from Rapaport News.

The partnership, the trade organization’s first collaboration with a retailer, seeks to attract young Chinese customers to naturally produced diamonds.

It also comes as Chow Tai Fook, which has more than 4,500 stores in East Asia and the United States, plans to expand its global footprint.

“One of our key priorities this year is to work closely with natural diamond retailers to protect and convey the authentic and unique beauty of natural diamonds together,” David Kellie, CEO of the Natural Diamond Council, said in the statement.

“I am confident that this partnership will solidify the values of and forge consumers’ desire for natural diamonds,” Chan Sai-Cheong, managing director (Mainland China) of Chow Tai Fook Jewellery Group added.

Earlier this month, the world’s biggest jeweller Pandora dealt a blow to diamond miners by announcing it would no longer sell mined gems, but exclusively man-made ones.

Since 2011, when prices peaked thanks to China’s younger shoppers, diamonds have faltered. Lab-grown stones, initially priced confusingly close to the real thing, posed a challenge.

Sales of jewelry and other luxury goods in Hong Kong fell by more than half in July, according to new figures.

Sales were hit by the ongoing coronavirus pandemic, a two-week quarantine requirement for tourists from mainland China, and continuing anti-government protests.

Figures for the first half of 2020 show revenue from revenue from jewelry, watches, clocks and other valuable gifts was down by 64 per cent to $2.14 bn.

Total retail sales for all sectors were down 23.1 per cent compared with July 2019, at about $3.41bn, according to data released yesterday by the Census and Statistics Department of the Hong Kong Special Administrative Region HKSAR government.

If you’ve ever gone through the process of shopping for an engagement ring, you’ll know there can be an overwhelming number of things to consider.

Aside from the look and style of your ring, you quickly start to learn an awful lot about diamonds, from the cut, to the colour and clarity.What you may not know is most diamonds in Australia over the last 10 years have been laser inscribed with a serial number likened to a ‘fingerprint’ — which makes it easier to trace should the unfortunate event that your engagement ring is lost or stolen ever take place.This code in turn makes your ring a ‘low risk’ theft item because it’s easy for police to trace it. But don’t go pulling your ring off your finger to check for that little serial number just yet.The code is inscribed directly onto the girdle of the diamond which is quite difficult to get to when it’s in a setting and it can’t be seen with the naked eye either, having to be checked under a microscope instead.

Speaking to 10 daily, Roy Cohen, a diamond expert from Certified Diamond Insurance, said this spot was specifically chosen instead of on the engagement ring band as this could be lost if it was melted down. Yet removing the code from the diamond itself is near impossible.”It cannot be removed unless the diamond goes back to a diamond polishing factory where it is put back on the wheel and polished off. I mean, there are very few diamond polishing factories in Australia so the chances of that happening are very remote,” Cohen said.”It’s even harder than for example, the engine number of a motor car. They could just machine it off. I mean, anyone could do that. But with a diamond? No. Only diamond cuts diamond.”

This process of inscription is completed by Certified Diamond Insurance (CDI) who are in partnership with a Australia’s leading diamond certifier, Diamond Certification Laboratory of Australia (DCLA), as well as the Woodina Underwiting Agency.Together they’re working towards driving the costs associated with insuring diamonds down for Australians, with new research finding almost half of Australia diamond engagement rings aren’t insured. If they are, 70 percent of these have inadequate insurance as they’re usually lumped with other items as part of home contents insurance.”If you go and get household insurance, you’ll be paying a standard kind of rate and because they cover everything, you’ll be paying slightly higher premiums,” Cohen said.”What we’ve done is we’ve pulled out all certified diamonds that are laser inscribed and we only ensure those diamonds. These are the lowest risk diamonds.”

CDI are further working on establishing a nation wide data base where individuals can register their ring along with it’s details and pictures. Should the ring ever be lost or stolen, it can then be flagged in this system, making it easier to locate.”Then wherever it ends up or if it’s ever checked against that data base or it ends up at a diamond grading laboratory, it will be identified,” Cohen said.”So the benefit is, let’s say it was a heritage diamond from your grandma or something like that, you actually have a chance of getting the diamond back.”

The London headquartered retailer announced Stephen Lussier, as De Beers executive vice president for marketing in charge of the operation. 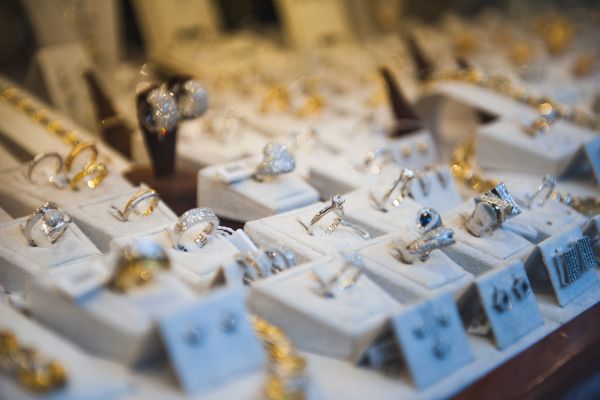 Consumers still prefer speaking with jewelers before making a purchase, despite the recent rise in online purchases, a survey has found.

Some 64% of people who bought jewelry visited a store to consult with an expert while deciding what to buy, according to a study released last week by Jewelers of America (JA). That’s 26% more than for other luxury items, the trade body’s online survey of 2,019 consumers showed.

Consumers who talk to a jeweler during the research process are also more likely to buy from a local store rather than online, the organization added.

“For consumers, seeing is believing, and they still rely on the expertise and knowledge of their jeweler,” said David Bonaparte, CEO of JA. “The jewelry shopping experience is different from other luxury purchases, and even in the rise of e-commerce, customers increasingly prioritize the in-store shopping experience.”

Even so, the brick-and-mortar trade is fearful of the impact of online sellers. In a separate JA survey of 257 of its members, spanning retailers and suppliers, 39% of jewelry retailers considered e-commerce to be their biggest competition.

However, only 34% of retailers surveyed actually have an online sales platform. At the same time, jewelers are working on improving their in-store experience by ensuring they have well-trained sales staff and high-quality customer service, the trade association added.

Jewelry self-purchasing is more popular for precious-metal products, JA found, with 56% of consumers considering gold jewelry to be a good choice as something to buy for oneself. Some 40% put sterling-silver jewelry in this category, while pieces containing diamonds and gemstones were more likely to be a candidate for gifting. Overall, 50% of consumers thought fine jewelry had sentimental value and helped to mark special occasions, JA said.