The new Diamond Charter calls for tight measures to prevent the misuse of certificates. It also requires companies to take action to stem the circulation of grading reports that are not attached to a stone.

The document, which the Gem & Jewellery Export Promotion Council (GJEPC) posted on its website last week, mandates ethical conduct and grants powers to punish those who misbehave. It is currently at the consultation stage, and could go into effect next month, GJEPC executive director Sabyasachi Ray told Rapaport News Monday.

“[Since] lab-grown diamonds came into the market, above [0.30 carats], no natural diamond is sold without a certification,” Ray explained. “This [underpins] the value of the diamond.”

The rules require grading institutions to give each diamond a unique identification number and a corresponding laser inscription when they receive it for certification, and to keep an accessible online archive of reports. They also compel labs to offer free verification services at major trading centers and maintain records of know-your-customer (KYC) documents.

Meanwhile, bourses must remind their members that trading of a certificate without the sale of a diamond is illegal, according to the charter.

The guidelines also govern what happens if a seller has multiple grading reports from different labs for the same stone and only wishes to give the buyer one of them. In this case, the seller should return the remaining certificates to the lab or destroy them within 30 days so misuse of the document is impossible, the charter continues.

The boards of the BDB and the GJEPC have approved the charter, with members of exchanges and the general public now able to comment on the draft before November 16, Ray said. Depending on feedback, implementation could happen by December 1, he added.

“Our understanding is that the charter is in draft; we look forward to learning more about it,” a GIA spokesperson said. “For many years, GIA has supported the efforts of trade bodies, including the GJEPC, in addressing issues of importance to the trade and to advance consumer protections.”

While grading fraud has been an issue for years, the phenomenon has become especially common since the rise of lab-grown diamonds.

In August, police in India discovered a scam in which people had sold low-quality diamonds bearing counterfeit certificates, a number of them involving forged GIA report numbers. Some of the stones were lab-grown but carried natural-diamond reports.

In May, the GIA reported a rise in submissions of lab-grown diamonds with counterfeit inscriptions.

Clarification, November 9, 2021: This article has been updated to clarify that not all the named organizations have signed up to the charter, which is still in a draft stage. A quote from the GIA has also been added.

Sarine Technologies has launched a new platform enabling manufacturers to tap its automated grading systems and issue a report in-house to support the needs of jewelers.

The company this week introduced its eGrading innovation via a video campaign on YouTube claiming the concept would “change diamond grading forever.” It allows manufacturers to self-execute third-party grading of the 4Cs — cut, carat weight, color and clarity — along with other personalized parameters required by the jeweler, without having to send the diamond to a grading laboratory.

“We believe the market is moving in this direction and our technology is now mature enough to make that happen,” CEO David Block told Rapaport News in a briefing at Sarine’s innovation center in Hod Hasharon, Israel.

“The digital aspect opens up the possibility to customize the report, which is difficult for a lab to achieve,” Block explained. “Once you grade the diamond at the source, the manufacturer is now responsible for its own destiny.”

The initiative builds on Sarine’s automated grading systems, with the company first announcing its ability to automate the grading of color and clarity, and therefore all the 4Cs, in 2016. It uses artificial intelligence (AI) machine learning to assess the grading results of tens of thousands of diamonds to arrive confidently at its color and clarity decision.

Empowering the manufacturer to execute the report enables it to provide a more personalized service to the jeweler. Block believes eGrading will improve efficiency for manufacturers, since they don’t have to send the stone out to the lab, while still using third-party verification. This saves on the time, expense, and opportunity cost of not having the diamond available to sell. And the retailer benefits from being able to tap the right goods from its supplier in a shorter period.

“Diamond grading is still in the Blockbuster days, where I need to send my diamond to the lab and wait for them to finish grading. They decide what goes in first and I get the stone back with certain criteria that are generally not good enough for me as I go out and sell the diamond,” he added, explaining that lab certificates are too generic.

While the retailer might want to emphasize other parameters such as the stone’s fluorescence, or different types of inclusions, among others, Block asserts it is difficult and expensive for the labs to go into the required level of detail.

Sarine claims its technology will provide those details as the system evolves, using the same AI machine-learning principles in other parameters as it applies for color and clarity grading.

In that sense, its eGrading program isn’t a finished product, and probably never will be, because Sarine’s systems are constantly evolving and improving, according to Block. “We’re presenting our vision for where the market is heading and we have developed the technology that we believe makes this possible,” he stressed.

The company expects to reach several new milestones in 2020 as it rolls the program out to the market, Block assured, without divulging what those might be.

He believes the industry is more than ready to embrace the cultural change the company is proposing, observing that the “the midstream is very tech-savvy.”

A means to an end

Block also recognized that others may be entering the same space. Representatives from De Beers and the Gemological Institute of America (GIA) joined Block in a panel discussion at the Dubai Diamond Conference in September by asserting that automation of diamond processes will come “sooner than you think.” Each independently stressed that they’re ready to propose a solution.

In that spirit, the objective of Sarine’s eGrading initiative is to realign the emphasis currently placed on grading reports, Block added.

“Diamond grading is not a goal in and of itself. Rather, the objective is to help price a diamond and to help source what you’re looking for,” Block said. “We’re looking at how we can improve the process to get to that goal of how to source the diamond. How people source diamonds will change. It’s natural that the industry will shift in this direction.”

After a long period of uncertainty, HRD Antwerp is looking to the future with a new and ambitious CEO. Ellen Joncheere, formerly the General Manager at Fremach, will be the new CEO at HRD Antwerp as of January 20th. The current interim CEO, Michel Janssens, will be retiring next summer.

Ellen has worked in a wide range of other sectors, including the automotive industry and environmental services, where she has transformed companies and strengthened their market positions in the face of rapidly changing market situations. She plans to help HRD Antwerp overcome the obstacles currently in its path, as well as prepare the entire organization for the future.

Over the past few years, HRD Antwerp has focused its attention on its core services of certifying polished diamonds, providing professional training and developing technological devices to detect laboratory grown diamonds. This has involved reorganizing its global structure and hierarchy.

Meeus, HRD’s former managing director, last week submitted a proposal to buy at least 51% of the lab in partnership with two unnamed individuals, he told Rapaport News Wednesday. IGI also placed a bid for the lab in the past two or three months, sources said.

“Although HRD has phenomenally lost its market share, the brand awareness is still there, especially in the Middle East, and also in India and Asia,” said Meeus, who headed HRD from 1999 to 2005. “With the whole issue of synthetics, it is my strong belief that once the consumer starts to know about it, all natural diamonds will be sold with a certificate, so this business will grow. The ambition is to bring it back to where we were, and we think we have a formula for that, which will multiply or amplify the number of HRD certificates globally, with a focus on the East.”

The Antwerp World Diamond Centre, which owns HRD, elected not to comment. 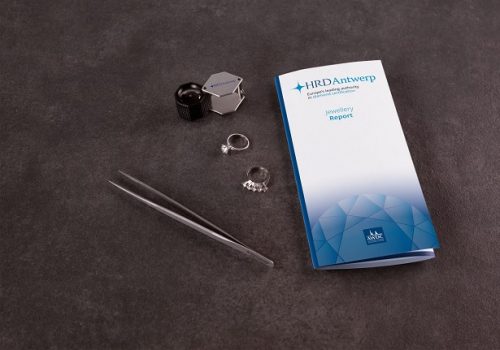 HRD Antwerp has expanded into the UK market with the opening of a new drop-off point in London’s jewellery quarter.

According to the diamond certification firm, the supply if lab-grown diamonds is ever increasing, and this is resulting in jewellers unknowingly selling jewellery which features a mix of natural and man-made stones. To help combat this, HRD Antwerp has introduced a new service for jewellery grading.

The new London drop-off point will give UK jewellers easy access to HRD Antwerp’s services, including jewellery and diamond grading reports at very competitive rates. The comprehensive grading report will provide jewellers with peace of mind, reassuring them that all of their diamonds are indeed natural, and not laboratory grown.

“There are increasing amounts of laboratory grown diamonds available on the market,” says HRD Antwerp commercial director, David Ziegler. “In an industry where so much relies on trust, it’s essential that you safeguard your reputation by certifying that all of your diamonds are natural and untreated.

A cost-effective grading report from HRD Antwerp is the most trusted and efficient way of ensuring all of your unmounted and mounted diamonds are 100% natural.”

The new drop-off point in London is designed to be convenient and easy to use. Loose diamonds and diamond jewellery can be brought or shipped to the London drop-off point. The diamonds are then sent to HRD Antwerp’s grading lab for comprehensive testing and grading, before being returned to London.

Each unmounted diamond will be accompanied by a grading report which clearly specifies that the diamond is natural, and rates it against the 4Cs. Each diamond jewellery piece will be issued with a unique grading report specifying the same.