Star Diamond Corp announced that a total A total of 2,409 diamonds weighing 123.27 carats have to date been recovered from the second bulk sample trench (19FALCT004) excavated on its Star kimberlite at the Fort à la Corne kimberlite field in central Saskatchewan.

These initial results are from the second of 10 bulk sample trenches excavated by 60% optionee Rio Tinto Exploration Canada Inc in 2019.

The average diamond grades from the first two trenches are similar to historical diamond grade results detected from the underground bulk sampling and large diameter drilling completed on the Star kimberlite between 2004 and 2009. These results are also similar to the overall weighted average grade 14 carats per hundred tonnes reported in Star Diamond’s PEA of the Star and Orion South kimberlites .

The three largest diamonds recovered to date from 19FALCT004 are 2.98, 2.03 and 1.99 carats, respectively, and were all recovered from Early Joli Fou kimberlite. The EJF is the dominant kimberlite unit within the project in terms of ore volume and diamond grade.

Senior vice president of exploration and development, George Read, states: “The initial diamond results from 19FALCT004 and 19FALCT001 continue to show grades similar to the previous underground bulk sampling and LDD performed by Star Diamond on the Star kimberlite. Individual EJF kimberlite samples recovered in the first two trenches exhibit a range of grades 9.81 to 21.22 cpht for 19FALCT004 and 4.88 to 23.34 cpht for 19FALCT001, which are as expected for the EJF kimberlite.” 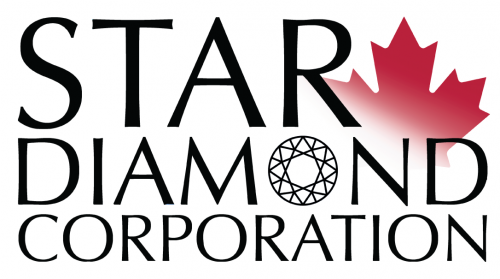 For the first time a trench cutter sampling system is being used to take a bulk sample of a Canadian kimberlite. Such equipment is normally used in specialist foundation engineering, rather than mineral exploration.

The rig cut a hole to a depth of 228.4 metres at the Star-Orion diamond project which is wholly owned by Saskatoon-based Star Diamond. The hole produced 704 bags of kimberlite. The operator of the project is Rio Tinto Exploration Canada.

The trenching rig consists of a Bauer BC 50 cutter mounted on a Bauer MC 128 duty cyclone crane. There is also a kimberlite separation unit and a desanding unit. The kimberlite will be stored in a secure area at the site until a bulk sample plant can be build and commissioned at the project. Rio will undertake final diamond recovery.

Star’s senior VP of exploration and development George Read said, “The successful use of this new trench cutter sampling rig technology for the recovery of kimberlite bulk samples has the ability to revolutionize future bulk sampling and mining of kimberlites, particularly for kimberlites characteristic of the Fort à la Corne diamond district.”