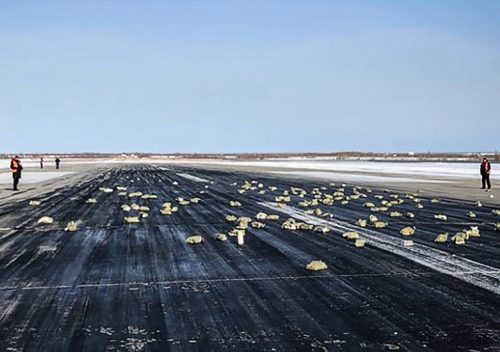 According to reports, the Nimbus Airline An 12 cargo plane’s hatch opened mid take off allowing the goods to fall out.

The incident occurred at Yakutsk airport in Eastern Siberia on Thursday, The Siberian Times reported.

Images appear to show the large bars scattered across the runway while another picture shows the large hole in the cargo section of the plane.

The Siberian Times reported that the plane dropped gold bars as far as 26 kilometres from the airport.
A spokesman told TASS: “A total of 172 gold bars weighing 3.4 tonnes have been found so far.”

Police sealed off the runway and a vast search is underway for the missing items.

It’s thought that the cargo belonged to Chukota Mining and Geological Company. Canadian Kinross Gold have a 75 per cent share in the company.

An investigation is now underway as to how the hatch managed to open and whether any staff were involved in the incident.

Technical engineers at the airport have been detained.