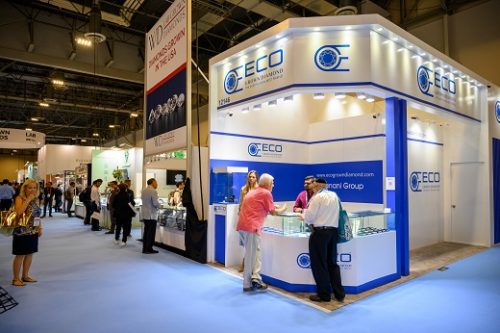 At JCK Las Vegas, lab-grown-diamond exhibitors have mushroomed nearly as much as opinions about the stones themselves. To accommodate growing market needs, organizers debuted the Lab-Grown Diamond Neighborhood at the 2018 edition of the trade fair.

“There may have been exhibitors that had lab-grown in the show in earlier years, but they weren’t grouped together in a neighborhood until 2018,” says Sarin Bachmann, event vice president for JCK and Luxury. “Lab-grown diamonds are a growing segment, and it became important for our buyers to have clear delineation of the category.”

This is why the show added a 6,400-square-foot designated section for 29 lab-grown exhibitors to display both loose stones and finished jewelry last year. It’s also why the area increased its footprint by 40% this year, with nearly double the number of participants.

‘They’re not going away’

Proponents of lab-created diamonds see opportunities for the stones to share case space with mined ones, as lab-grown constitutes another way for consumers to spend discretionary dollars on jewelry as opposed to other product categories.

Indeed, lab-created diamonds helped fourth-generation jeweler Pia Aiya’s family business stay afloat during the recession. “Lab-growns came out of need but grew into something more,” says the Aiya Designs director of operations. “They are another avenue or tool.”

Raj Vaidya, owner of six-month-old DiamSpark Lab Grown Diamonds, agrees. “They’re not going away,” says Vaidya, whose parent company has been in the mined-diamond industry for 25 years.

“The affordability of lab-growns has increased the public’s awareness of them,” he adds. “And the industry is actually buying them in large-scale quantities — like 1,000 at a time. They are not on memo.”

Price may be the biggest factor in customers’ purchasing decisions — synthetic diamonds can cost a third of what natural ones do, according to interviewees — while sustainability and transparent sourcing are close behind.

Evolv, a division of longtime manufacturer Joseph Blank, dipped its toes in the lab-grown-jewelry waters in 2016, though sales have been slow until recently. Now the business is every bit as viable as mined diamonds.

“There’s less resistance from consumers and more from the industry, though we continue to get gradual increases in requests for them,” explains CEO Douglas Blank. “Our company is 100 years old, and lab-growns are keeping me busy and our phones ringing.”

Of course, the individual purchase figures can look disappointingly low compared to natural. “We just sold a 3.50-carat lab-grown stone for $13,000 that would have been $30,000 in a mined diamond,” he relates.

Of all the pros and cons, the most compelling argument for selling lab-created diamonds is that consumers are buying them.

For Sehal Mody, chief operations officer at GoGreen Diamonds, the proof is in the sales. His firm — a four-year-old division of a 40-year-old natural-diamond-jewelry manufacturer — has gone from making about two sales a month 10 years ago to getting retailer requests for entire showcases full of both loose lab-grown diamonds and finished jewelry.

“Retailers are looking for bridal and fashion basics,” he reports.

The biggest impetus for sales? Lightbox. Before the De Beers lab-grown jewelry line emerged, many merchants were hesitant to embrace this product category. Now sales are heating up, as is evident from the expanding Lab-Grown Diamond Neighborhood at JCK. At press time, JCK Las Vegas was still finalizing plans for the section’s further growth in 2020. Blank has already requested a booth double the size of this year’s.

Fenix, another lab-grown company, used virtual reality at its JCK booth to present the gems as a product that offered consumers a choice. In a five-minute experience, retailers could see the growing and cutting processes for themselves — the latter carried out at a factory in India.

“We’re not looking to pick a fight about what’s better or not,” says brand-builder Andrea Hansen, who aided Fenix with its campaign. “But we are well-equipped for volume, from 30 points to 3 carats and more. Lab-growns could dominate the fashion space.”

Bigger as they go

That speculation paves the way for the inevitable question of what’s next for synthetics. Many are saying bigger pieces of finished jewelry, and definitely more sales — though how much more is anybody’s guess.

“The percentage of lab-grown sales may just be 2% now, but if 2% becomes 3%, then we’ve seen a 50% jump,” says Kinish Shah, owner of Splendid Lab Diamonds. A 27-year veteran of natural diamonds under Surediam, his company began working in synthetics three years ago.

Of course, proponents of both types of diamonds exist and have “diamond dreams,” according to Hiren Goti, CEO of newcomer SkyLabDiamond. He says he doesn’t understand the negative opinions about lab-grown. “I don’t know why people are so worried. You can’t stop shoppers from buying what they want. It’s their choice.”

Members of De Beers’ Lightbox team remained cool under questioning at JCK Las Vegas as they addressed a packed conference room about the company’s lab-grown-jewelry product. That included queries about those who might manipulate inscriptions on stones larger than 0.20 carats to deceive buyers.

“We’re not here to police the rest of the industry,” said chief merchandising officer Sally Morrison, “but we could maybe work with the International Grown Diamond Association [IGDA] to help create standards for the overall health of the sector and to not undermine consumer confidence.”

Lightbox CEO Steve Coe offered clear communication about the manufacturing process for the brand’s fashion-forward pink and blue colors, which come in basic styles like studs and pendants.

He also pointed to broader gifting opportunities like sweet-16 presents at retail prices ranging from $200 to $1,000.

In addition, the stones aren’t graded, which reinforces the fact that they’re manufactured like other mass-produced items. “There’s not one that’s better or worse than any other in the lineup,” said Coe.

Meanwhile, women of all ages and ethnicities have said they find the jewelry appealing and feel pretty wearing it, according to brand research and video testimonies. And Lightbox’s $94 million investment in a manufacturing facility in Gresham, Oregon, which is slated to become operational in early 2020, signals how important the US market is for Lightbox’s business.

This article was first published in the July 2019 issue of Rapaport Magazine.