Swiss watch exports fell 11% year on year to CHF 1.59 billion ($1.78 billion) in January, the 12th consecutive monthly drop, as demand slowed in the US and in key Asian markets.

Shipments to the US declined 11% to CHF 183.3 million ($204.5 million), partly because strong figures in January 2020 created an unfavorable comparison, the Federation of the Swiss Watch Industry said Thursday.

Supply to Hong Kong dipped 9% to CHF 169.3 million ($188.9 million) last month as market conditions deteriorated, while exports to the UK and Japan slumped due to the tightening of Covid-19 measures, it added. January also had one fewer business day than the same period a year earlier.

The negative figures outweighed a 58% jump in orders from China, for a total of CHF 255 million ($284.5 million), mirroring a continued recovery of the retail sector on the mainland.

The numbers point to a worsening of the situation versus December, when the global decline was the mildest since the start of the pandemic as Chinese demand rose. The trade hasn’t witnessed a year-on-year increase since January 2020.

“The result for the month will nonetheless have only a limited effect on the upward trend seen since last summer, and a return to significant growth is expected over the next few months,” the federation noted.

The ring features a 21.86-carat Colombian square-emerald-cut emerald flanked by diamonds and mounted on 18k yellow gold. The emerald is described in the grading report as having “minor clarity enhancement” and a “richly saturated medium deep slightly bluish green, slightly included with a few surface reaching inclusions, and the girdle bearing a chip and a few nicks, noticeable under 10x magnification.”

The ring was from the collection of Cecile Zilkha, best known for her lifelong interest in the arts, particularly The Metropolitan Opera.

The sale overall was quite successful, taking in a total of $46.9 million, the highest total for a Sotheby’s jewelry auction since 2017. In addition, 91% of the lots sold, with 74% of the lots fetching prices above their high estimates and nine pieces surpassing $1 million.

Fancy colored diamonds, including three heart-shaped gems, made up the top five lots prior to the sale. However two of the gems failed to meet the reserve price. The first was the anticipated top lot of the sale, a pink gold and platinum ring set with a 5.03-carat cut-cornered rectangular mixed-cut fancy vivid pink diamond, accented with two cut-cornered triangular step-cut fancy intense blue diamonds. Its estimate was $9 million – $12 million.

The second was a ring centered with a 2.28-carat fancy vivid blue heart-shaped diamond, encircled by round yellow and framed by white diamonds with an estimate of $2.25 million – $3.25 million.

The three remaining fancy colored diamond lots sold within estimates and were the next three top lots of the sale. They are:

* A 1.71-carat heart-shaped fancy red diamond with SI2 clarity surrounded by white diamonds and mounted on an 18k white and pink gold pendant for a necklace. It fetched more than $3.1 million.

* A 3.67-carat fancy intense blue diamond in a cut-cornered rectangular modified brilliant-cut diamond. The stone is flanked by two emerald-cut diamonds and mounted on an 18k white gold ring. It fetched more than $2.6 million.

* An 18k white and pink gold ring centered with a 2-carat fancy vivid orange diamond framed and accented by round diamonds that fetched nearly $1.9 million.

As mentioned, private collections were an important part of this sale. In addition to the Cartier emerald ring, the Cecile Zilkha collection comprised of 28 other signed and historic jewels. Among the standouts:

* Emerald and diamond earclips by Bulgari that fetched more than $1.1 million, double its high estimate;

* A silver-topped gold, sapphire and diamond brooch that fetched $625,000, more than double its high estimate;

* A ruby and diamond bracelet by Harry Winston that fetched $441,000, well above the high estimate.

The sale ended with 11 jewels from the collection of Marylou Whitney. The top lot in this collection was a Cartier necklace composed of 32 rare natural pearls with a diamond clasp. It fetched more than $1.6 million, more than three times its high estimate.

In addition, two David Webb pieces from the Whitney collection performed extremely well. The first was a platinum bracelet set with 10 emerald-cut diamonds weighing 21.16 carats. It fetched $352,800, above estimates. The second was a showstopper Mughal-inspired necklace that boldly displays a 181.95-carat translucent carved emerald and 10 cabochon emeralds that weigh a total of 126.30 carats, along with rubies and diamonds. The necklace sold for $327,600, more than triple its high estimate.

While Cartier, Bulgari and Harry Winston dominated the headline sales, jewels from Van Cleef & Arpels may have had the biggest impact overall. Twenty-eight jewels by the Parisian luxury brand were sold at the auction. The top lot from Van Cleef & Arpels was a mystery-set sapphire and diamond brooch designed as a flower from a New York collector that sold for more than $1.1 million, nine times its high estimate. That was certainly a headline sale.

An indication that private collections and signed jewels were going to dominate came at the very beginning of the sale. The first 10 lots from a private family collection were by Van Cleef & Arpels. They all sold well above their estimates.

* A jadeite, natural pearl and diamond necklace by Raymond Yard, circa 1935, sold for $1.6 million after competition from three phone bidders, more than four times its high estimate. The piece was offered from the estate of Mary Lily Kenan Flagler.

* A Cartier sapphire and diamond bracelet in a fan design, circa 1960s, that fetched just over $1 million, just topping its high estimate.

* A ring set with a 1.08-carat pear-shaped fancy vivid blue diamond accented by round diamonds sold for $927,500, above estimates. The piece was offered by a Texan collector. 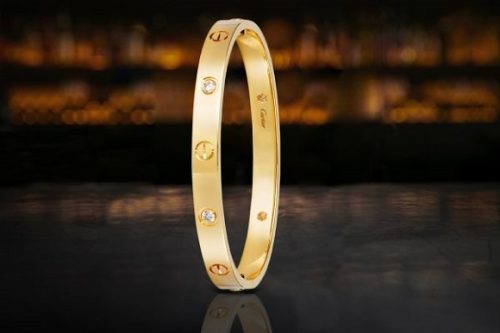 Cartier and Van Cleef & Arpels have filed a lawsuit against a Florida jeweler, claiming willful infringement on a number of the luxury jewelers’ famous trademarked collections.

Scott King Inc., registered for business as Florida Diamond Brokers and King Jewelers, allegedly sold imitations of jewelry belonging to the Richemont-owned divisions, the May 6 suit, filed in the US District Court of Florida, claims.

In November 2018, an agent of Cartier and Van Cleef visited King Jewelers, and noticed the store was selling counterfeit copies of the jewelers’ pieces. Those imitations included Van Cleef’s Alhambra and Perlée collections, as well as Cartier’s Love and Juste un Clou collections, engraved with the brands’ trademarked name, the suit claims. The prices for the items ranged from $900 to $1,125 for earrings, and more than $6,000 for bracelets, a similar range to Cartier and Van Cleef’s own prices.

The agent returned to the store the following month, and again in February, according to the lawsuit. During the first visit, employees of King Jewelers allegedly informed the agent that the jewelry was not authentic Van Cleef and Cartier pieces, but rather “inspiration” jewels made to look like them. An employee also said the products were not listed in the store’s catalogues because they “don’t want to get in trouble.”

Cartier and Van Cleef are asking the court to order King Jewelers to turn over all its counterfeit jewelry to them for destruction, and to recall any pieces it has distributed to retailers and other customers. They are also suing for the total amount of profits King Jewelers has made from all sales of the copied pieces, plus up to $2 million per counterfeited collection and per each jewelry category (bracelets, rings, etc.) within those collections.