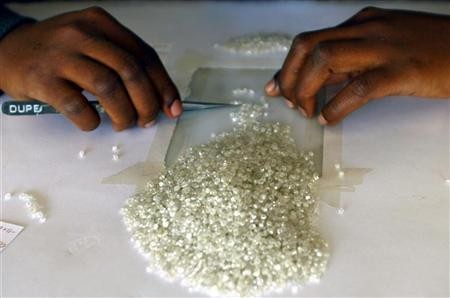 The $5,1bn purchase of the Oppenheimer family’s 40% stake in De Beers by Anglo American has completed one hurdle of the sale.

Anglo has opted to grow aggressively in diamonds field unlike BHP Billiton and Rio Tinto who are seeking buyers for their diamond assets.

The Botswana government has the option to lift its holding to 25%, buying part of the Oppenheimer stake. They currently have a 15% stake in De Beers.

De Beers two major mines Jwaneng mine in Botswana and Venetia mine in South Africa produce most of the gem quality diamonds contributing to De Beers production.

Capital Markets have forecast soft prices for rough diamonds. But De Beers CEO Philippe Mellier has said the longer-term outlook for diamonds is strong, with strong demand from China and India for diamond jewellery.