Israel’s diamond exports improved in February amid steady jewelry demand in key retail markets and the opening of a trade channel with Dubai, according to government data.

The ministry attributed the growth to higher demand for studded jewelry in the US and China. As for rough trading, 16% of exports were to the United Arab Emirates (UAE), with which Israel reached a peace deal in August, the government noted. Before that, Israel was unable to ship goods directly to Dubai, an important center for rough tenders. The improvement also came despite a February lockdown in Israel, which affected the availability of flights, the ministry pointed out.

“The industry has cause for optimism after a difficult year,” said Ophir Gore, Israel’s diamond controller. “The data that the global diamond sector has seen in the past two months — especially in the American diamond and jewelry market — indicate demand has recovered. The first half of this year is expected to be particularly positive for the industry.”

Diamond bourses in Israel and the United Arab Emirates (UAE) have signed a cooperation deal following the recent peace accord between the two Middle East countries.

The Israel Diamond Exchange (IDE) will open a representative office in Dubai, while the Dubai Multi Commodities Centre (DMCC) will establish an office Ramat Gan, the organizations said Thursday following a virtual ceremony. The two nations’ diamond sectors will also work together to promote trading, and agreed to organize an Israel-Dubai diamond fair.

“Through the World Federation of Diamond Bourses (WFDB), we have come to know and value the leaders of the Dubai diamond industry,” said Yoram Dvash, president of the IDE and the WFDB. “The agreement will enable us to build on these relationships to the benefit of the members of our respective bourses.”

On August 13, Israel and the UAE agreed to normalize relations and cooperate on trade. While diamond executives had quietly been traveling between the two nations for some time, the peace treaty enabled formal business ties.

Image: The Israel Diamond Exchange and executives at the opening of the redesigned

The Israel and Dubai diamond exchanges have signed an agreement to promote cooperation in a deal certain to boost direct trade between the Middle East’s main diamond hubs.

The agreement was announced on Thursday two days after Israel and the United Arab Emirates signed an historic agreement to normalize ties and marks a further development in economic collaboration.

The diamond deal, finalised in a video conference ceremony, was welcome news for an industry hit hard by the coronavirus pandemic and overall weaker global demand.

As part of the agreement, the Israel Diamond Exchange (IDE) will open an office in Dubai and the Dubai Multi Commodities Centre (DMCC) will open one in Ramat Gan, home to the Israeli exchange.

The two parties said they will share experience and knowledge, work to promote bilateral trade and collaborate on exhibitions, visits and conferences. They also agreed to arrange an Israeli-Dubai diamond fair to be held in Dubai and Ramat Gan and to promote electronic trade.

Israel is one of the leading exporters of polished diamonds. IDE President Yoram Dvash said that Dubai, with its free zone and convenient business conditions, has become one of the most important diamond centers in the world.

The Dubai Diamond Exchange is part of the government-owned DMCC. The total value of rough and polished diamonds traded in Dubai last year exceeded $23 billion, the DMCC said.

“This agreement will attract businesses to the emirate as well as boost the regional and international trade of this precious stone,” said Ahmed Bin Sulayem, executive chairman of the DMCC and chairman of the Dubai Diamond Exchange. 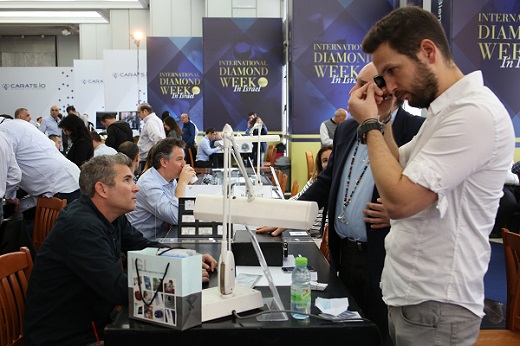 The Israeli government has pledged $284 million (NIS 1 billion) to guarantee bank loans to diamond companies in an effort to ease the trade’s severe credit difficulties.

A lack of credit is stifling growth, especially among the smaller firms that constitute about 70% of the Israeli trade, according to a special committee set up to investigate the sector’s challenges.

The team — led by Naama Kaufman-Pass, deputy director-general of the nation’s Ministry of Economy and Industry — released its findings earlier this month, highlighting several ways in which the industry had hit a crisis.

Banks’ perception of the diamond sector as high-risk has led to a decline in total lending to the Israeli trade from $2.5 billion in 2008 to about $1 billion last year, the committee said in its report. Financial institutions are also refusing to accept dealers’ inventory as collateral, while competition from India and Belgium has added further damage to Israel’s market position.

To this end, the government fund will back companies’ borrowing, meaning that if they fail to repay a loan to a bank, the state will pay. While the committee submitted the policy to Eli Cohen, minister of industry and economy, as a recommendation, the lawmaker said the government was set to go ahead with the program.

“We have decided to allocate another billion shekels over the next five years to the diamond sector through credit guarantees,” Cohen told an audience at the International Diamond Week in Israel last week.

In addition, the committee suggested the government provide money for the bourse’s newly launched innovation laboratory, put cash into bringing more diamond buyers to Israel, support efforts to develop e-commerce opportunities, and contribute to other projects to boost the industry.

“The committee identified the main hurdles in small businesses’ activities in the sector, and its recommendations offer a comprehensive response to its needs,” Kaufman-Pass said.

The diamond trade is an important segment of the Israeli economy, representing about 13% of total exports, and employing about 9,500 people, according to the report. However, the 2008 global financial crash led to a 27% slump in Israel’s polished-diamond exports between that year and 2016, with the Chinese market slump in 2015 also denting demand.

“Implementing the committee’s conclusions, alongside other steps, is essential, considering the crisis the sector has been through,” Cohen added in a statement. “Their purpose is to provide new tools to help deal with challenges in the trade and to ease regulation, thereby growing both production and exports.”

Shay Rinsky, director-general of the Ministry of Economy and Industry, set up the committee in September to delve into issues of credit and growth in the diamond trade and examine how to bring the industry forward.