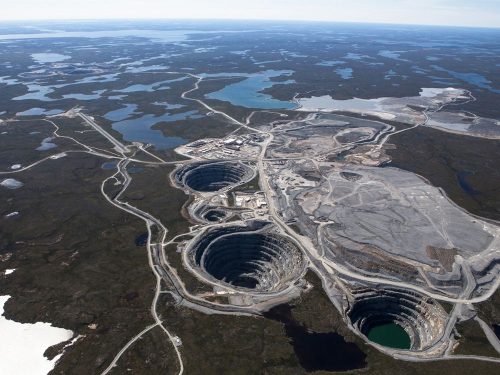 It’s only been 20 years since diamond mining began in Canada, but the industry is already on its knees.

The story of how two prospectors, down to their last nickels, discovered diamonds in Canada’s frozen north is the stuff of legend.

Back in 1982, Chuck Fipke and Stewart Blusson laid low in a pup tent by day while their competitor De Beers hauled 45-gallon drums of rock samples to a nearby outpost for transport to South Africa. Using the long hours of summer sunlight north of the 65th parallel, the two searched for indicator minerals — bits of garnet, chromite or zircon often found with diamonds — while their opponent slept. Nine years later their treasure hunt culminated with the discovery of a carrot-shaped funnel of blue-grey kimberlite rock that would become Ekati — the first great diamond mine outside Southern Africa or Russia.

For all the drama associated with the discovery in Canada’s Northwest Territories — hacking through snow and ice taller than the average person, battling Arctic winds and temperatures of -50 degrees Celsius — what came next is proof that diamond mining in Canada is not for the faint of heart.

Whether a diamond mine makes money or not comes down to three variables: production costs, the grade and size of the deposit, and the price the diamonds fetch on global markets. In recent years, all of these have conspired to bring the Canadian industry to its knees.

“It’s disconcerting, given the way it started,” said Blusson, an active octogenarian who helms diamond exploration company Archon Minerals Ltd. and still flies his own helicopter. “Twenty years is only all we’ve been mining now. Is there going to be another 20 years? I don’t know.”

Ekati and sister mine Diavik, located 210 kilometres (130 miles) south of the Arctic Circle, are now old, tired and running out of diamonds; they will likely both close soon. So far, the mines that were designed to replace them aren’t faring well either.
Diamonds from the Diavik mine in 2003. Ian Lindsay/Vancouver Sun files

De Beers, the London-based diamond giant, has already flooded one of its huge Canadian mines; the other, Gahcho Kue, took 21 years to reach production and is now turning out stones worth far less than it hoped. It’s a similar story for a scattering of newer mines that have sprung up across the country: low quality stones, management mistakes and falling prices for their stones put a terrible squeeze on their businesses.

Every operating mine in Canada produces stones that fall below the global average, with all but one mine producing diamonds that fetch less than US$100 a carat. By contrast, both De Beers and Alrosa, which mine more than half the world’s diamonds, average more than US$160 a carat. For smaller miners in Southern Africa, the gap is even more extreme. Gem Diamonds Ltd. and Lucara Diamond Corp. had average selling prices of US$2,131 and US$502 per carat respectively last year.

While Canada is now the world’s third-biggest diamond producer, behind Russia and Botwsana, its average selling price is the cheapest of the major diamond mining countries.

The question for Canadian producers is whether it makes sense to change strategy and focus on bigger, more valuable stones.

“Can you save considerable amounts of money by upping your cut-off size and just recovering those goods?” asks Eira Thomas, who co-founded Stornoway Diamond Corp., and served as its president and chairwoman for years. Now chief executive officer of Vancouver-based Lucara Diamond, which produces high-end diamonds in Botswana, Thomas is more optimistic about Canadian production than Blusson.

“They’re not in jeopardy of failing, they’re just not making as much money as we had hoped,” Thomas said. “And that, of course, is translating to discontented shareholders more than anything else.”

That may be an understatement. Shares of Longueuil, Quebec-based Stornoway trade near a record low of just 10 US cents a piece, even after opening the US$750 million Renard mine in 2017, the province’s first. It’s a similar story for Toronto-based Mountain Province Diamonds Inc., which owns Gahcho Kue with De Beers. Its shares are close to the lowest since the financial crisis, cutting its market value to below $250 million (US$187 million).

Canada’s flagship miner, Dominion Diamond Mines, the owner of Ekati and a stake in Diavik with Rio Tinto Group, has also had a rough ride. After being bought for US$1.2 billion more than a year ago, the company has been hit by an exodus of top management, with at least five executives leaving, including its CEO and CFO.

The new owner, billionaire Dennis Washington, has also sought to sell the company, according to people familiar with the situation. Washington denied this is the case. Dominion is currently studying two potential expansions, though both projects produce even lower-quality stones, making them a tough sell in the current environment.
Maturing Sector

“You have a maturing sector in Canada: Ekati and Diavik were good mines. When you have good mines, others follow even if the economics are a bit more of a close call,” said Anish Aggarwal, a partner at consultant Gemdax, based in the diamond trading city of Antwerp. “That’s becoming a problem in many mining jurisdictions, not just Canada.”

There are other problems facing the sector. Indian Prime Minister Narendra Modi’s fight in 2016 against so-called black money caused producers such as De Beers to hold back supply, which has now been sold back into the market. A weaker rupee is also making diamonds more expensive for Indian manufacturers, who cut or polish about 90 per cent of the world’s stones.

There is also increasing pressure from synthetic diamonds. While still a very small part of the industry, the potential threat they pose risks further hurting sentiment in an already fragile market.
A synthetic diamond ring.

Still, there are reasons why Canadian diamond mines keep getting built — and in some cases it has little to do with economics. For De Beers, which has developed three mines there, Canada reduces its dependence on Botswana, where most of its diamonds are mined.

Aggarwal, who was involved in developing what became known as the “CanadaMark” brand to capitalize on the country’s clean image, says there’s potential for more to be done with that.
Canada Brand

“Consumers in the U.S. and Canada have positive associations with Canadian diamonds,” he said. “There’s an opportunity with origin. It’s a tool that the miners can use to enhance the value of their diamonds.”

But the track record there hasn’t been good either. Canada tried to create a polishing industry in the Northwest Territories, capitalizing on the backlash against “conflict” diamonds. “Made in Canada” diamonds seemed an easy sell: ethically produced, mined from ice, cut, polished, and laser-etched with a tiny polar bear. Today, the polishing industry is all but gone and attempts by Dominion to revive the CanadaMark have met with mixed success.

There’s no getting around the higher costs of operating in Canada’s frozen tundra. Everything — labour, fuel and construction — costs more in the remote north.

“You look at these diamond mines, you’ve got your own road, your own airstrip, your own power grids,” said Tom Hoefer, executive director of the NWT & Nunavut Chamber of Mines. “That may be okay if you’ve got a world class deposit, but not everybody is mining world class assets.”