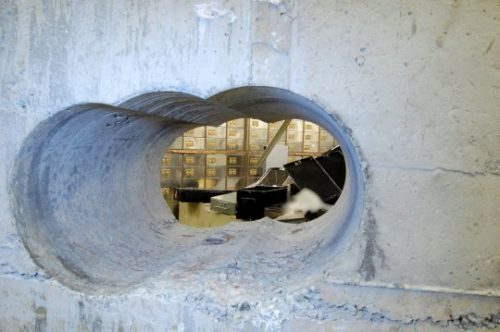 An upmarket Fleet Street jewellers has been robbed by burglars who tunnelled in Hatton Garden style and made off with an estimated £1 million in diamonds and gems.

George Attenborough and Son Jewellers on Fleet Street in central London was hit at some stage over the weekend, as thousands of runners competing in the London Landmarks Half Marathon thundered past nearby. The firm advertises items worth tens of thousands of pounds such as Cartier diamond rings on its website.

The Sun suggested the thieves who are still at large used drills to gain access to the secure building and complete the raid. A Scotland Yard statement confirmed members of its Serious and Organised Crime Command were involved in the investigation.

It said: ‘Police were called shortly before 2am on Monday, March 25, to a report of a burglary at a jewellers in Fleet Street. ‘A quantity of jewellery was stolen. ‘An investigation has been launched, led by detectives from the Met’s Flying Squad.

‘Forensic examination work is continuing at the scene. ‘No arrests have been made. Enquiries are ongoing to establish the circumstances and identify those responsible.