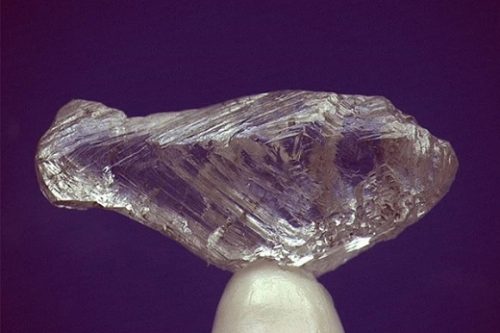 Alrosa’s knack for recovering unusually shaped diamonds has scaled new heights with the discovery of a rough stone resembling a fish.

“In the photo, you see a very rare specimen: a rough-diamond crystal which pretends to be a fish,” the Russian miner wrote in an Instagram post Wednesday announcing the find.

As with its other similar hauls, Alrosa hooked the catch to a marketing goal, using the occasion to emphasize the care it takes to preserve sea life around its mines. Alrosa ecologists release “hundreds of thousands” of fish into rivers in Yakutia and its other mining regions every year, the company explained in the post. In October, it plans to introduce “valuable” broad whitefish into Siberian waters.

Last summer, the company unveiled a rough diamond resembling a soccer ball in the middle of the World Cup taking place in Russia, for which it was a sponsor. The company also found a stone that looked like a skull in time for Halloween, and stumbled upon a heart-shaped piece a few weeks before Valentine’s Day this year.