Lucapa Diamond announced that it has entered into a binding asset sale agreement for the acquisition of a 24km2 mining lease and a 283km2 exploration tenement encompassing the mining lease and associated equipment and assets the Merlin Assets from Merlin Operations Pty.

Merlin Operations is a wholly-owned subsidiary of Merlin Diamonds Limited, which is in liquidation. The Merlin Tenements are located in the Northern Territory of Australia, approximately 720km southeast of Darwin.

Merlin is home to Australia’s largest mined rough diamond on record and has the potential to be the
only producing diamond mine in Australia, following the closure of Rio Tinto’s iconic Argyle mine in 2020, after 37 years in production.

The strategic acquisition is supported by a A$20 million ($15.5m) private placement plus a share purchase plan to raise up to A$3 million ($2.3m).

The ~300km2 tenement package also comes with significant exploration upside, Lucapa said, through over 70 unresolved anomalies in areas where all kimberlite discoveries have been diamondiferous. 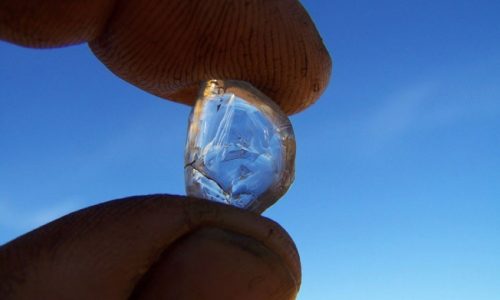 Australia’s corporate watchdog has sought Federal Court approval to wind up Joseph Gutnick’s publicly-listed company, Merlin Diamonds, and flagged an inquiry into whether the colourful Melbourne businessman has breached his director’s duties.

The Australian Securities and Investments Commission’s (ASIC) move against the man known as “Diamond Joe” due to his appetite for outback diamond and gold deposits confirms the worst fears of Merlin Diamonds’ shareholders, who have already endured a seven-month trading ban on the company’s stock.

Court filings released to The Age and Sydney Morning Herald on Tuesday show ASIC is seeking an order to appoint Deloitte as liquidators of Merlin Diamonds, which had a market capitalisation of just $20 million when its stock was banned from trading last October.

ASIC has for months been probing how Merlin Diamonds has loaned $13 million of investor money to a private company, AXIS Consultants, which has long been associated with Mr Gutnick.

“The loans have been used to fund private companies associated with Joseph Gutnick and provide no discernible benefit to Merlin Diamonds,” ASIC said in a statement on Tuesday evening.

In one example cited by ASIC, it alleges Merlin Diamonds in October 2016 received $900,000 from a Mr Gutnick-linked company, Chabad Properties, for convertible notes and options issued to Chabad.

“The ultimate source of the $900,000 paid by Chabad, through a series of transactions involving related companies, was Merlin Diamonds. Mr Gutnick is a former director of Chabad,” ASIC’s media statement revealed.

ASIC has asked the liquidators to examine and provide an opinion on whether Mr Gutnick and other past and present Merlin Diamonds directors and officers, have breached the Corporations Act.

It wants this opinion, as well as advice on the company’s assets, solvency and likely return to creditors, within 42 days of the liquidators being appointed.

Mr Gutnick is one of Australia’s best-known business figures, was once a regular on the BRW richest 200 list and a benefactor to many Jewish charities.

As president of a stricken Melbourne Football Club during the 1990s, the ordained Rabbi’s financial support kept the club alive.

“It’s been handed to lawyers to examine and defend,” he said.

ASIC has sought an order to release to Deloitte documents it has amassed relevant to Merlin Diamonds, Mr and Mrs Gutnick and a host of Gutnick-controlled or associated private companies.

Among the named private companies is AXIS Consultants, which The Age and Sydney Morning Herald revealed in February was at the heart of ASIC’s investigation into Merlin Diamonds.

AXIS, which shares the same Moray Street Southbank office as Merlin Diamonds, has received about $18 million dollars in unsecured loans from publicly-traded companies led by Mr Gutnick, including Merlin Diamonds and the company formerly known as Top End Minerals.

Unfortunately for shareholders, AXIS has been unwilling or unable to repay bulk of the loans, which have had to be written off by the public companies as impairments and are, most likely, unrecoverable.

“The terms of the Loans appear to be unreasonable, uncommercial and non-arm’s length,” ASIC’s media statement said.

Merlin detailed the terms of these AXIS loans in its 2015 annual report stating: “No fixed terms for repayment of loans between the parties, no security has been provided and no interest charged.”

When the Australian Securities Exchange started asking questions about the loans to AXIS in October last year, Merlin Diamonds reported that it “does not have access to the financial information of AXIS”.

This was despite Mr Gutnick, his son Mordechai Gutnick and long-time business associates, Peter Lee and David Tyrwhitt, all having served as directors of Merlin Diamonds and AXIS at some stage in relevant years when money was loaned.

At the same time as Merlin Diamonds was transferring money to AXIS- which would then often makes loans to other Gutnick-associated entities – staff and consultants at the company’s Northern Territory mine complained they had gone months without pay.

Mr Gutnick earlier this year said nearly all outstanding claims had been resolved.

In February Mr Gutnick appeared unconcerned by ASIC’s investigation into Merlin Diamonds and his network of private companies saying: “I’ve had ASIC look at transactions I’ve done for 30 years.”

But with ASIC’s new leadership team of chairman James Shipton and prosecutor Daniel Crennan QC promising a more aggressive approach in the wake of the banking royal commission, Mr Gutnick may face a more rigorous examination.

The Federal Court has yet to schedule a hearing for ASIC’s action against Merlin Diamonds, with the corporate watchdog filing its documentation last Thursday.