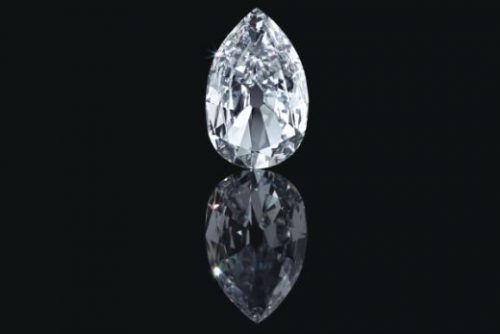 Christie’s New York auction will feature a 17.21-carat diamond given to Queen Charlotte of Great Britain by a regional ruler in India.

The pear-shaped, brilliant-cut diamond, called Arcot II, was found in India’s Golconda region in the late 18th century. The stone, presented to the queen by the Nawab of Arcot, will go under the hammer at the Maharajas & Mughal Magnificence sale on June 19, the auction house said last week.

The stone is one of a number of Indian jewels from the Mughal period featured at the sale. The lots on offer span a period of more than 500 years.

“This landmark collection traces the history of Mughal jewels and objects to [the] present day, and represents the most significant collection of its type ever to come to auction,” said François Curiel, chairman of Christie’s Europe. “The collection begins in Mughal India, the most important dynasty that ruled the country, famous for its emeralds, diamonds, sapphires, rubies, jeweled weapons and objects that are bejeweled beyond belief.”

Christie’s will also offer the Mirror of Paradise, a 52.58-carat, D-color, internally flawless Golconda diamond, as well as carved Mughal emeralds ranging from approximately 10 carats to over 200 carats.

Other notable lots include the Imperial Spinel Necklace and sarpechs — traditional Indian turban ornaments. A diamond necklace originally from the collection of the Nizam of Hyderabad, featuring almost 200 carats of Golconda diamonds, will also be for sale.

The Mughal jewels are from the collection of the Al-Thani dynasty, the ruling family of Qatar. The auction house will preview the items between April 24 and June 18 in London, Shanghai, Geneva, Hong Kong and New York.