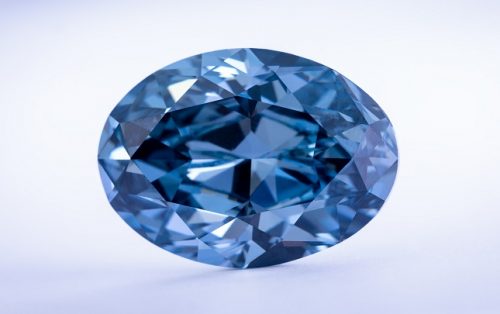 The Okavango Diamond Company revealed a unique polished blue diamond weighing over 20 carats, the biggest blue diamond discovery ever made in Botswana.

The diamond was discovered at Botswana’s Orapa mine as a 41.11 carat rough stone. Its unique and vibrant blue color is the result of the inclusion of boron which between one to three billion years ago was present in the rocks of ancient oceans during violent diamond forming volcanic activity.

“From the first moment we saw the diamond, it was clear we had something very special. Everyone who has viewed the 20 carat polished diamond has marveled at its unique coloration which many see as unlike any blue stone they have seen before. It is incredibly unusual for a stone of this color and nature to have come from Botswana, a once in a lifetime find, which is about as rare as a star in the Milky Way,” says Marcus Ter Haar, MD of Okavango Diamond Company.

“At ODC we have access to 15 percent of Debswana’s run of mine production and feel extremely fortunate to be involved in such a singular find. Only a handful of similar blue stones have come to market during the last decade, of which the Okavango Blue rightfully takes its place as one of the most significant,” said Ter Haar.

The iconic Okavango Blue will be showcased over the coming months to promote Botswana as a leading global producer of natural ethical diamonds with an anticipated sale toward the end of the year.