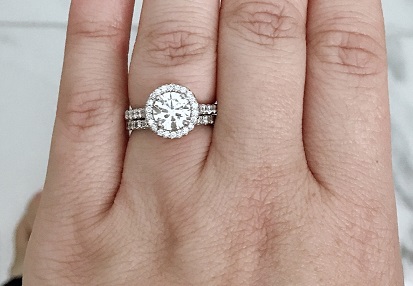 It’s no secret that Israel is one of the largest suppliers of cut diamonds the world over. And, if you have ever bought an engagement ring, chances are you have likely been presented with the option of buying an Israeli diamond.

According to USTradeNumbers, Israel ranked 22nd in total global trade this year with a total of $18.37 billion. Of that, more than $6.5 billion came from the importing and exporting of you guessed it diamonds.

I recently read a story published in Canada’s Financial Post titled, “A diamond may be forever for some but for millennial it’s looking like not so much”, lamenting the potential demise of the mined diamond industry.

In it, the author states:

the millennial generation poses an existential dilemma for the industry: they tend to spend on experiences rather than luxury items, achieve financial maturity later in life and are less likely to get married than previous generations.

It’s an interesting argument to be sure. And, if true, this trend could pose challenging for countries like Israel who rely so heavily on the art of refining mined diamonds.

The story goes on to argue that it’s not just the lifestyle choices of millennials that pose a threat to the old adage that diamonds are a girl’s best friend it’s the growing popularity of something called artisan or lab created diamonds.

Yeah, I’m not so sure I agree with that.

Many in the media have been making the same argument about the luxury watch industry for years now. While quartz  and other digital offerings may well be more accurate than mechanical wristwatches, the appeal to aficionados and luxury buyers is simply not there. Same for smart watches, which, to be sure, have a place among the masses and those interested in fitness, but do not affect demand for brands like Rolex, Cartier or Patek Philippe. Someone who wants a Rolex simply will not buy an Apple Watch as an alternative and call it a day. It’s like comparing apples and oranges.

While these manufactured stones may well be incredibly difficult to distinguish from mined diamonds, even to the most well trained gemologist, I am not convinced they will take much if any market share from those who truly want to buy a traditional diamond.

Now don’t get me wrong, I’m not saying the mined diamond industry isn’t susceptible to demand changes. Surely the past few years have illustrated it is indeed possible. I’m also not suggesting no one will buy this new type of jewelry stone. Some people will choose man made diamonds over the mined ones. And, they’ll pay less money and get a larger stone too.

But I predict manufactured diamonds will be to mined diamonds what Tudor is to Rolex or what Acura and Lexus are to BMW and Mercedes a quality alternative with a comparable look and feel, but cheaper, less valuable and ultimately less desirable.