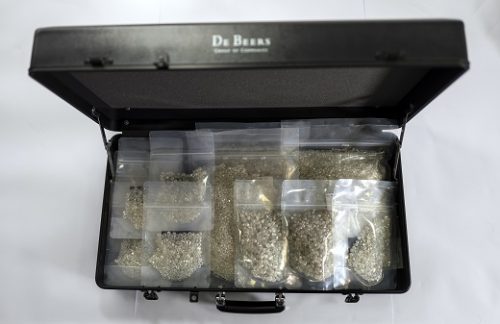 De Beers’ rough-diamond sales plummeted 53% this month as customers accepted the miner’s offer to defer purchases until the market improves.

Weak polished demand and excess supply in the manufacturing and trading sectors have hurt sightholders’ appetite for rough goods, sources explained. As a result, revenues fell to $250 million at De Beers’ sixth sales cycle, the company reported Tuesday — the lowest since late 2015.

“In the US maybe the demand is there, but because of slow demand in Hong Kong and China, we are not able to get the sales [to match] our inventory,” a sightholder told Rapaport News Tuesday. “It’s difficult to make money, and [with high inventories] it’s difficult to keep on buying rough and manufacturing like normal.”

De Beers kept prices steady at last week’s July sight in Botswana, after lowering them in June, buyers said. Instead of offering further discounts, it permitted customers to delay purchases, over and above the standard allowance of one deferral of a box of goods per “band” (selection of goods) per half year. Relaxing the buying obligations should help ease the crisis affecting the market, which will dissipate when diamonds work their way through the pipeline, De Beers predicted.

“With ongoing macroeconomic uncertainty, retailers managing inventory levels, and polished-diamond inventories in the midstream continuing to be higher than normal, De Beers Group provided customers with additional flexibility to defer some of their rough-diamond allocations to later in the year,” De Beers CEO Bruce Cleaver said. “As a result, we saw a reduction in sales during the sixth cycle of 2019.”

Sales haven’t been this weak since December 2015, when proceeds totaled $248 million. According to Rapaport estimates, the November 2015 sale was even smaller, at approximately $180 million.

Sightholders and brokers showed little optimism that the situation would improve soon, as companies need to sell their excess goods to redress the imbalance of stocks.

“The current crisis in the midstream has moved upstream,” Dudu Harari of brokerage firm Bluedax wrote in a report on the sight. “This means producers can’t sell the quantities they are used to. If they want to increase their sales, there will need to be a big price correction downward to allow the market to reduce its stock of polished.”

De Beers’ rough-diamond revenues have declined 23% year on year in the first six sales cycles of 2019, according to Rapaport calculations. The next sight begins on August 19.

Image: A box of rough diamonds from a De Beers sight.