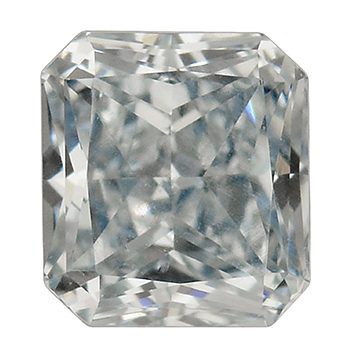 The good news is, from everything we know, all lab-grown diamonds are detectable, and the detection devices are getting better and (somewhat) cheaper.

The bad news is that unethical people are still apparently devising new and innovative ways to cheat. Take GIA’s first sighting of a natural/lab-grown composite diamond with a fancy colored grade, which was first announced at the U.S. Jewelry Council forum on undisclosed lab-grown diamonds last week.

According to a GIA Lab Note published on Monday, the 0.33 ct. diamond was first graded fancy blue at the GIA’s New York laboratory. But what caught scientists’ attention was it had both nitrogen and boron defects. It is rare to see boron defects in a natural diamond—and even rarer to find both types of defects in one stone.

Further examination showed something else quite unusual: The stone was both type Ia and IIb diamond, another rare combination. (In fact, GIA reports running across that combo only once before, in 2009.) Finally, the truth was discovered. This was a colorless natural diamond with a small CVD coating on top. That coating gave it a fancy blue color when viewed from the table.

While the GIA note mentions that composites have been produced before, this is apparently the first composite GIA has discovered submitted (undisclosed) to its lab. This raises the possibility of more in the wild. This obviously is a troubling discovery—though someone with knowledge of the issue said at last week’s forum that he believes that GIA’s devices would be able to spot it.

Another lab exec told me producing these composites is likely not easy, or cheap, to do. But this will clearly be something to watch (and watch out for) in the future.